This could just as well have appeared under another category called "Deleted Scenes," but I chose to make it my first entry under Religion. In any case, this is a scene deleted from someone else’s movie, specifically that of The State‘s religion writer, Christina Knauss. She and I had traded e-mails back and forth after my column about the new pope. I thought about publishing it on our op-ed page, but it seemed a little too late. So I saved it for the blog, and here it is:

Brad, this is a draft of a column I had written when JP II died. I thought you’d like to see it. A version of it was going to run with our papal funeral coverage, but somehow, at the last minute, we ran out of room. Thought as a fellow Catholic I’d share it with you…

I waited until I got out of the newsroom to cry.
The day I heard of the death of Pope John Paul II, I stared at the three TV screens we have hanging on a wall, picked up a notebook and figured out what local tribute Mass I was going to visit.
Then, in the car, I heard National Public Radio broadcasting an excerpt from John Paul II’s 1999 CD "Abba Pater," in which his gentle voice read prayers to the Virgin Mary over a melancholic classical score by a young Italian composer.
It was only then that tears came. In the car, alone.
In this business, you see, we are not supposed to let other people 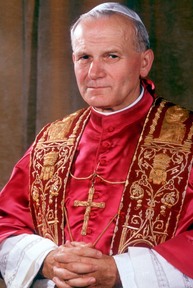 see us cry. Not the people we cover, and most of the time, not the people you work with.
It’s called journalistic objectivity.
It has a place.
But not when the only Pope you’ve ever known has died. When a simple priest from Krakow has become over 26 years like a member of your own family, when a loving face on a holy card can make you feel better about life even on the darkest days.
When that man has died, objectivity can be a hard thing.
Karol Woltija, Pope John Paul II, was the Holy Father during every milestone of my life. Graduations from eighth grade, high school and college. The deaths of my mother, three grandparents, cousins and dozens of friends and acquaintances. First jobs and new jobs and job searches. Relationships entered and lost. My only two travels overseas. The marriages and subsequent divorces of several high school and college friends. The births of my godchildren.
All of these things in my life, as well as 9/11, Hurricane Hugo, the fall of communism, elections, funerals, natural disasters and other crises and triumphs in the life of the world …. Karol Woltija was the man who came to a window in St. Peter’s Square and offered blessings that carried me, and us, on through all of these things.
I am the same as thousands of other Generation X Roman Catholics. For us, John Paul II was the only person we ever thought of when we heard the word "Pope." We were in elementary school when he was elected, dealing with jobs, mortgages, families and other elements of adult life when he died.
26 years is a long time. In the life of a woman, a man, in the life of a Church.
But over 26 years, for those of us who called the Church of Rome our spiritual home, John Paul II was there. Unchanging in his persistent love of God, and seemingly, of all of humankind, even though his body went from the youthful, purposeful young Polish pope challenging communism to the broken and bent old man who still managed to bring a loving glint to his eyes when confronted with a child or by crowds calling his name.
I, like many others of my generation, didn’t always agree with his conservative positions on birth control, women in the priesthood,and other issues. But for me, Karol Woltiya always seemed a bit like family, and when someone is part of your family, and you love them, you are able to disagree on certain things while agreeing on other, more basic and important values.
For me, Pope John Paul II embodied, in his facial expressions, his writings, his gestures, his words, all that was and is beautiful about Roman Catholicism and about Christianity in general.
When I think of him, and all the images I saw of him in all those 26 years, all I can think of is love. Pope John Paul II embodied love. He showed it to everyone he met. And he showed what can happen when a man dedicates himself to following the path of God and allows the love of God to shine through him.
And, less spiritual but still important, in all those 26 years, we knew where Pope John Paul II stood. We knew what he believed in and what he thought was important. Unlike so many leaders who have come and gone in those 26 years, he did not have a hidden political agenda and did not feel the need to bend his ideals to fit whatever interest group was knocking at his door in a particular year. You knew what you were getting with Karol Woltiya.
And in this day and age especially, that counts for something.
So yes, I have cried many tears in the past week for Pope John Paul II. The only pope I have ever known. I can’t as yet imagine a Church without him at the helm. I can’t imagine that window over St. Peter’s Square without his face appearing there.
"Be not afraid" he said to the crowd his first night as pope in October, 1978.
I’m not afraid of life without Karol Woltiya at the helm of the Catholic church.
But the thought of it makes me sad.
I imagine it will for a long time.
I can’t be objective about that.
Rest in peace, Holy Father.