Celebrity worship is a mystery to me. This puzzlement is deepened by the case of Michael Jackson.

OK, I can sort of understand how someone might have become a fan of his at one point. In the early ’80s, he was a remarkably talented young black man. But now that he is no longer young, or black, or manly in any way you’d notice, and hasn’t put forth any striking evidence of talent lately, about all he’s got left is being remarkable. And not in a good way.

I’m not saying this to be mean or anything like that. I just don’t see how, beyond memories of some catchy tunes and dancing that seemed to defy physical laws, anybody would feel any sort of emotional involvement in anything that Mr. Jackson does, or anything that happens to him or doesn’t happen to him.

And yet there are people who really, really cared what happened in his trial. 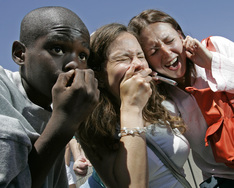 They were willing to put their whole lives in suspense over whether he was found "guilty" or "not guilty." They made it their business to be there at the courthouse, as close to his side as possible. They were ecstatic at the verdict.

What I want to know is, Why? It seems to me that even a cursory examination of the stipulated facts regarding Mr. Jackson would give any sensible person considerable pause. I mean, I can seeing pitying a man who lives in a fantasy world and sleeps with young boys to whom he is not related (even innocently), and has obsessively done bizarre things to his own body. But I can’t see how anyone would admire him, or hitch one’s own happiness to his fate.

7 thoughts on “What’s WITH these people?”