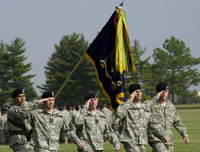 But I probably took more heart from this news than from anything I’ve seen in a while. I realize the other things are probably more substantially significant, but there’s something reassuring on a gut level about the 506th PIR being resurrected, even if it isn’t technically a Parachute Infantry Regiment any more.

That unit distinguished itself to such a degree in Normandy, Holland, Bastogne and Germany in 1944-45 that the young men who have

adopted "Currahee" as their battle cry (after the foothill near Toccoa, Ga., that the original soldiers of the 506th had to run up and down — three miles each way — as a routine, daily part of their initial training in 1942) have a tremendous tradition of honor to live up to. From what I’ve seen from our soldiers and Marines in the field in this war, I’m sure they’ll meet the challenge, and old heroes such as Dick Winters and "Wild Bill" Guarnere will be proud to call them brothers.

6 thoughts on “‘Band of Brothers’ to go to Iraq”