Gamecock, Tiger team up against caps
By Brad Warthen
Editorial Page Editor
WEEK BEFORE last, I ran into USC President Andrew Sorensen as he was on his way to an “unprecedented” meeting with House Speaker Bobby Harrell. They were going to talk budgets.
What was so new about that?
“Carolina and Clemson are talking to him at the same time,” Dr. Sorensen said. “And we’re using the same numbers.” To those who remember the old days of tigers and chickens fighting like… well, like cats and birds, over funding, this was remarkable. Mr. Harrell was so “overwhelmed,” Dr. 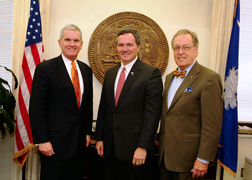 Sorensen later said, he sent for a photographer to record the event.
“Jim and I have become increasingly close in terms of… what we want to do and how we want to do it,” Dr. Sorensen said when he and Clemson President James Barker visited the editorial board last week.
Mr. Barker stressed that this new level of cooperation was “not because of the governor’s ‘tax.’ ”
In his latest executive budget, Gov. Mark Sanford proposed “a one percent reduction for Clemson, USC, and MUSC that will result in savings of $3,232,091 in general funds to encourage such further collaboration.”
“Yes,” said Dr. Sorensen, “he takes away a million from each of us to stimulate us to collaborate…. if you can understand the logic in that, please explain it to me.”
This is not the only area in which the two presidents agreed with each other and disagreed with the governor.
For instance, there is the governor’s proposed cap on tuition increases. Sounds good, doesn’t it? It would help me out, with my fourth child now in college.
And I like the governor’s stated goal, which is to force consolidation and reorganization of the state’s non-system of public higher education.
But are caps a good idea for the state of South Carolina? No, and not just because this isn’t going to convince lawmakers to cut the number of institutions.
Tuition started shooting up when the Legislature decided to cut back on direct funding of colleges, and give middle-class voters scholarship checks paid for by poor folks suckered into playing the lottery.
South Carolina’s public colleges have experienced a larger percentage decrease in state funding than those of any other Southern Regional Education Board state over the last decade — a period in which most SREB states increased funding.
Of the 16 states, only West Virginia funded its colleges at a lower percentage of the regional average last year. South Carolina was at 72.45 percent of that average. North Carolina was at the top end, at 136.95 percent.
Higher state funding means lower tuition. Not coincidentally, Kiplinger’s recently listed UNC-Chapel Hill as the best deal in the country, measured by quality compared to cost. Out of 130 public colleges listed, Clemson was 24th, and USC 31st — in spite of those tuition increases.
Or perhaps because of them. The money to improve academics had to come from somewhere. And since the General Assembly has seen fit to turn the money over to the students, via scholarships, that’s where the institutions have turned for funding.
At USC, said Dr. Sorensen, 96 percent of entering freshmen get “one of the lottery-funded scholarships.” At Clemson, it’s 99 percent. In fact, said Mr. Barker, “At Clemson, not one freshman from South Carolina paid full tuition” this year.
OK, so the heads of the schools don’t want tuition caps. Big surprise. What about the students? I don’t know about all of them, but some student government leaders at USC sent a letter
to the governor last week asking for a meeting “to make you aware of our concerns with these proposals, as we feel they do not completely address the desires of students.”
One of the signers, student body Treasurer Tommy Preston, was diplomatic about the governor’s plan when I asked about it, saying that it was “our opinion that there’s just not enough information” to know, but it seemed the caps “potentially could be harmful in the future.”
Never mind what the treasurer thinks. What does Tommy think?
“Personally,” he said, “I think our state has a bigger problem with higher education funding.”
Smart kid, that Tommy.