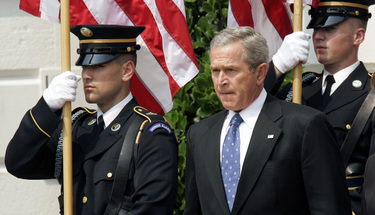 Support for U.S. Iraq effort and
support for Bush not the same
By BRAD WARTHEN
Editorial Page Editor
IT’S OK TO WANT the United States to succeed in Iraq, and still disapprove of President Bush. Really. It’s allowed.
You don’t have to feel guilty if the president’s energy, tax and spending policies make you go “nookeelar,” but you understand that what matters in public policy is what you do with the situation you’re in — not the situation you would be in if you could rewrite history.
There’s nothing wrong with you.
In fact, you owe it to your country to separate your feelings about Mr. Bush from your knowledge that failure in Iraq is not an option. It also helps if you have a clear grasp of the cold fact that he will be the president until 2009.
The single most important challenge, foreign or domestic, facing this country is to succeed in helping the Iraqi people build a free, safe and stable place to live. At the same time, the country needs another president — one just as committed to the mission, but with a clearer idea of how to accomplish it — to take over.
But that can’t happen for almost three years. Given recent defeatist poll results, holding out that long is a tall order. But opinion that shifts one way can shift the other. That’s why every word I write about Iraq is aimed at persuading anyone I can reach that we must remain committed.
That’s what I tried to do in that super-long column we ran Sunday — to summarize all the reasons why, and how they connect.
The response was mostly encouraging. Blog respondents who slap me around on a regular basis said complimentary things — even some who disagree.
“Brad, this is a very thoughtful and well-organized argument for your viewpoint on Iraq,” wrote Phillip. “Of course, as you know, I disagree with most of it, but won’t rehash all of that here, just wanted to give you props for the good column.” Thanks, Phillip.
Of course, we still had “Mary Rosh” out there to say, “Once again Warthen proves what a lazy, cowardly, hypocritical piece of garbage he is.” Mary’s not reachable.
What worried me more was LeRoy, whom I seem to have reached, and yet not: “Sorry Brad but your sentiments are misplaced. True we are now in Iraq and unfortunately stuck there for several decades…. However to stay there with the same team that ‘had the best intentions in the world’ is misplaced loyalty.”
How can he agree that we can’t leave, but interpret such commitment as support for the “team” that led us there? And what does he propose as an alternative to riding out the next three years with this team?
“BLSAiken” wrote: “The President as much as admitted the other day that it will take another president to close out the mess he’s made. Brad makes some substantively good points, but it’s moot until the present band of nincompoops, including Bush, Cheney, Rumsfeld, Rice, etc., are out of office.”
I’m anxious for another crew to take over, too. I don’t think those guys (and I’ll get to Ms. Rice in a moment) are “nincompoops,” but I think they have made far too many mistakes after the invasion. And Mr. Rumsfeld should have been replaced long ago. I made that clear in my Sunday column.
But I didn’t go on and on about it.
Why? There’s no point. In late 2003, I begged for a candidate
to step forward and offer a credible alternative to the incumbent. I wrote out a long litany of what was wrong with the president.
But that was then, when there was a chance to replace him. That chance is gone.
Bush-haters have fantasies of impeachment, or censure. This is idiotic. If he were impeached, Dick Cheney would be his replacement. (No, Virginia, they wouldn’t go out together.) And you couldn’t impeach both before their terms end. All you would accomplish is to weaken the United States in a time of war. Ditto with censure.
We are already badly weakened. War/Bush opponents may have succeeded in infecting a majority with despair and defeatism, despite the relative success on the ground in Iraq. Even the Bush administration occasionally exhibits this battle-weariness; it was disturbing to hear Ms. Rice saying we might draw down in the near future.
All of this plays into the hands of those who mean us nothing but ill — and want nothing but oppression for the Mideast.
A Wall Street Journal op-ed Wednesday described the thinking of a leading foreign policy strategist in Iran’s radical Islamist government:

“To hear (Hassan) Abbasi tell it the entire recent history of the U.S. could be narrated with the help of the image of ‘the last helicopter.’ It was that image in Saigon that concluded the Vietnam War under Gerald Ford. Jimmy Carter had five helicopters fleeing from the Iranian desert…. Under Ronald Reagan the helicopters carried the bodies of 241 Marines murdered in their sleep…. Under the first President Bush, the helicopter flew from Safwan, in southern Iraq, with Gen. Norman Schwarzkopf aboard, leaving behind Saddam Hussein’s generals, who could not believe… they had been allowed (to) live to fight their domestic foes, and America, another day. Bill Clinton’s helicopter was a Black Hawk, downed in Mogadishu….

“According to this theory, President George W. Bush is an ‘aberration,’ a leader out of sync with his nation’s character and no more than a brief nightmare…”

Mr. Abbasi is anxiously waiting for that “last helicopter” to leave Iraq, so that he and his ilk can fill the vacuum. I’m hoping and praying Mr. Bush will keep sticking it out, and that his successor will exhibit equal resolve, but greater effectiveness.
This nation’s great tragedy is that far too many Americans agree so strongly with Mr. Abbasi that the president is a “nightmare” that they, too, long to see that “last helicopter” take off, because they badly want to see Mr. Bush fail.
Hate the president if you insist. I wouldn’t recommend it — since he’s the only president we’ve got, you’re much more likely to influence policy by constituting a rational, loyal opposition than by foaming at the mouth. But that’s between you and him.
I beg you, though: However you feel about the president, please love your country enough to support its crucial mission in Iraq. For all the reasons I wrote about Sunday, there simply is no good alternative. Don’t just “support the troops”; that’s a cop-out. Support what they’re doing, the goals they give their blood, sweat and tears for. They deserve that much. So do the rest of us.

22 thoughts on “Another Iraq column”