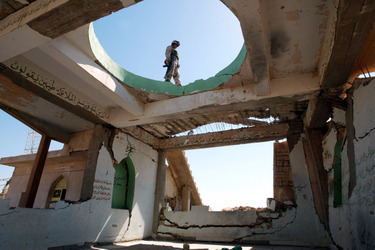 Iraq: Why we’re there,
why we must stay

By Brad Warthen
Editorial Page Editor
I WAS BRIEFLY taken aback when a colleague reminded me that we were coming up on the third anniversary of “the war.”
I thought we passed the fourth one last September. Within days after 9/11, I turned a file drawer over to “War,” and started filling it with articles, maps, photos and other items relating to “Afghanistan,” “Arabs,” “Britain,” “Bush,” “Civil Liberties,” “Iraq,” “Islam,” “Mideast,” etc. In my e-mail files, there are 27 folders under “War.” “Iraq” is but one.
Then I realized the other editor meant the Iraq campaign, dating from the 2003 invasion. I felt pretty thick. That was a huge milestone, worth addressing prominently. This war’s heaviest fighting, 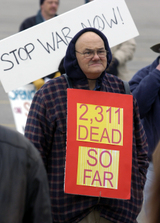 and America’s greatest losses (since the one-day losses of 9/11), have been on that front. So last Sunday’s editorial took stock of where Iraq stands, three years on.
Today, after seeing, hearing and reading an avalanche of commemorative rhetoric from all sides, I address it again.

Lever of change
The war that began on 9/11/01 — that is, the long, asymmetrical war on the West that we Americans first fully recognized that day — was one we did not choose.
Maybe that’s why we had neglected for so long to connect the dots between the USS Cole and Al-Qaida, Afghanistan and Osama bin Laden, bin Laden and our retreat from Somalia, Somalia and poverty, poverty and tyranny, oil and U.S. support for oppressive regimes, those regimes and radical Islam, Islamists and terror.
The invasion of Iraq, as a critical element of this war, was a fight that we chose, as critics keep 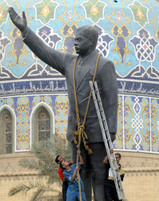 saying — but only in a sense. Iraq was where we decided to insert the lever with which we would attempt to turn back half a century of Near East politics and policies.
The fact that Iraq was the likeliest place to insert it was not our choice. It was Saddam Hussein’s. He invaded Kuwait, which caused us to lead a coalition to throw him out in 1991. He then violated, for 12 years, the terms established as the price of remaining in power. He shot at American aircraft. He defied the United Nations again in 2002, when he was told that his one chance to stay in power was full cooperation. (He also — although this is incidental to my point — was the one who paid bounties to the families of Palestinian suicide bombers.)
The United States — and Britain, Spain, Italy, Portugal, the Netherlands, Poland, Norway, Denmark (most of Europe, other than France and Germany) and about two dozen other countries — decided to take action.

About the WMD
And yes, pretty much all of those nations, and the countries that refused to participate (publicly), 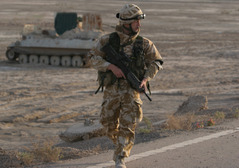 believed Saddam still had weapons of mass destruction. So did his own generals, who were counting on it. He did a wonderful impersonation of a man with something to hide, when all he was still hiding was the fact that they were gone.
I never thought his WMD programs were the best reason to invade. I thought he had them, but I doubted they were an immediate threat. His behavior on the subject gave the coalition additional justification to take action, but it never really moved me. I preferred the other big one the Bush administration talked about in 2002 — regime change. That, too, was fully justified, by Saddam’s behavior over the previous 12 years.
The idea, which has been iterated over and over by everyone from the president to Thomas Friedman, was to start a sort of reverse domino effect — to drop a big rock into the pond, and generate ripples of liberal democracy that would lap against, and erode, the status quo in Syria, Lebanon, the Palestinian territories, Egypt, Saudi Arabia, Libya and, if we got lucky, maybe even Iran. That process has at least begun in every one of those places except Iran — and don’t give up on Iran.
In some ways Iraq wasn’t the place one would choose to drop the rock. It was profoundly, violently Balkanized and, like the country that spawned that adjective, had been held together by force. But it was the one place where the reigning despot had provided justification to step in.

Why take action?
Why drop a rock at all? Why disturb the status quo? Hadn’t we done all we could to prop it up for decades? Wasn’t that why the president’s Dad stood by and let Iraqi rebels he had stirred up be slaughtered (possibly the most shameful thing my country has done in my lifetime) — because creating a “power vacuum” in Baghdad wouldn’t be “prudent”?
Absolutely. We had propped up an intolerable status quo in the Mideast for decades. Why? To keep the oil flowing. I am dumbfounded when a war protester says Iraq is about oil. The first Gulf War was about oil; this is about the opposite.
This one is about knocking the oil barrel over to see if we can’t get something better than 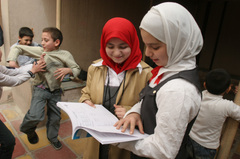 oppression, frustration, hatred and terrorism to flow out of it. It was never, ever going to be easy. It remains hard enough that fewer and fewer Americans see how we can succeed. The challenges do remain daunting, but enormous progress has been made — often in spite of the Bush administration’s decisions. We’ve had highly successful elections — the last one with broad Sunni support — and internal security is increasingly in Iraqi hands (which is why U.S. casualties have recently slowed).
Does forming a new government not present a huge hurdle? It does, but no more so than challenges already met. We have made it this far in spite of never having enough troops to provide the proper level of security.
However hard it is, we have no choice. We’ve knocked over the barrel, and we have to deal with it.

Many faults, one virtue
President Bush drives me nuts. His refusal to transform our energy strategies to make us stronger i 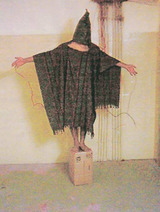 n fighting this war is unconscionable. And don’t get me started on his undermining our international financial position, or his failure to fire Donald “We’ve got enough troops” Rumsfeld after Abu Ghraib.
But this deeply flawed man has one saving grace: When those planes flew into those towers, he got it. He knew that this was no longer his father’s world. He still sees it all rather hazily, but he sees it. And he’s stubborn as a stone. He will not give in to ripples of panic spreading through the electorate, not even (I fervently hope) to save his own political party.
When he pointed out last week that pulling back in Iraq would be up to future presidents, and future Iraqi governments, I could have hugged him if he’d been closer. It was about time that he said what I wrote the very week American boots hit Iraqi sand — that he had crossed his Rubicon and taken the rest of us, including his successors, with him.
It still stuns me that people can even consider pulling out, or ask when we will pull out — this year, next year? What utter madness.

The long haul
If we did that any time within the foreseeable future, our nation would lose all credibility. No country, including our worst critics, would believe in American resolve within our lifetimes. Nor would we. It would be much worse than our global fecklessness after Vietnam. When the day came (and it would come) that the world needed America to lead it in standing up to some obvious, World War-sized threat — say, a belligerent China or a nuclear-missile-launching Iran — no one would trust us not to leave them in the lurch. Nor should they.
Just as bad, we would have no credibility with terrorists. When the United States ran from Somalia after losing 18 men right on the verge of accomplishing the mission, Osama bin Laden drew certain conclusions about our resolve in the face of violence. The result was 9/11. What might he, and his millions of imitators, conclude if we ran from this exponentially greater mission? What horrors would they be emboldened to unleash if we were foolish enough to think we had the power to decide when it’s over?
We can’t leave, folks.
Even if the insurgencies ended today, we couldn’t leave. Even if the Sunni and Shiite gunmen turned on the foreign jihadists and drove them out tomorrow, then made friends with each other the next day, we couldn’t leave. Even if the hardheaded politicians in Baghdad formed a Madisonian democracy next week, we’d have to stay. It would be a long, long time before an infant republic could keep from being devoured by Iran from the east, Turkey from the north and Syria from the west. Our republic had oceans to keep it safe until it was big and strong; Iraq doesn’t.
As daunting as the situation is, there is only one way to be certain to lose: Give up. We’ve already

made this a lot harder than it has to be by showing doubt. Every American who says we shouldn’t be there makes the terrorists a bit bolder, and the would-be Iraqi democrats a bit more afraid to risk their lives on our assurances.
From his tax cuts to his Medicare drug plan to his threat to veto anti-torture legislation, there’s not much that President Bush has to sell that I would want to buy. But I pray to God and to my fellow Americans that he succeeds in selling the product he was taking door-to-door last week. The alternatives are too horrible.