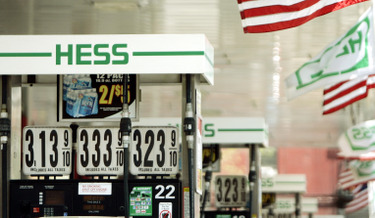 "Look!" wrote my colleague Mike Fitts in an e-mail yesterday. "– an idea even less popular than your huge gas tax hike!"

"And even better, in my book," I wrote back.

He was referring to this letter on today’s page:

After reading Mike Fitts’ excellent column, (“U.S. helping to keep
oil prices marching upward,” Friday) on the woeful consequences, both
economic and diplomatic, of rising oil prices and of the inevitable oil
shortages to come, I’d like to put another option on the table: oil
rationing, which could bring a variety of benefits.

Many lament the fact that the only ones called upon to sacrifice in
this time of war are those on the front lines (and their families).
Rationing gas would call on everyone to sacrifice, just as during World
War II, when we all had ration cards, not only for oil but for many
other of life’s necessities such as meat, clothing and tires.

Fitts tells us that demand for fuel keeps going up, despite the
steadily rising price, which means leaving it to the market to control
supply and demand isn’t working. So perhaps only the government can
bring this control.

Fitts also points out that since our country consumes 25 percent of
the world’s oil, we can’t lecture other countries on the need to
conserve. But we can lead by example.

Rationing could give us some short-term breathing space as we labor
to find alternatives for the long haul. Yes, it is a political hot
potato, but isn’t it time to at least bring it to the table for
discussion?

Mike was also referring to my enthusiasm for the idea floated by such disparate voices as Charles Krauthammer, Tom Friedman and Jim Hoagland, advocating a huge increase in the federal gas tax to take the already uncomfortably high gasoline pump prices high enough to depress demand. This would in turn create an oversupply, driving down prices. But (at least in the variant I like), you’d keep the tax rate up and use it additional for such sensible things as reducing the deficit, paying for a Manhattan/Apollo-style project to find and develop viable alternatives to petroleum, and pay for other aspects of our underfunded war — you know, like, put enough troops into Iraq and Afghanistan to get the job done. And note that I call military operations "other aspects" of the war. Reducing our energy dependence and taming deficits are as important to our strategic position as our ability to project force.

Oh, yes: Krauthammer would use the revenue to cut some other tax. But he has to say that; he’s a neocon.

Former Rep. Keyserling’s idea is even better in one respect — everyone would share the pain. With a high tax, the rich would keep on driving Hummers, and the poor would have a lot of trouble getting to work. The main benefit would occur among the middle class, who would make the choice of driving less and, when they bought a car, buying a much more fuel-efficient one. With rationing, everyone would be limited in their consumption. And it would be a more overt, deliberate way of saying, "We’re all in this together, and we’re doing something about it together," rather than letting the market pressure of high prices sort things out.

But then, it wouldn’t produce the revenue. So I qualify my flippant remark to Mike: The higher tax still might be better.

18 thoughts on “Rationing? Even better”