A generals’ revolt may be ugly,
but who else has the credibility?
By Brad Warthen
Editorial Page Editor
SO YOU WANT to impeach President Bush?
Well, for the first time, I can see one way that ditching him might be helpful, and not hugely destructive, to a nation at war:
It would put Dick Cheney in charge, and he might have what it takes to fire Donald Rumsfeld.
Sure, they are old comrades and longtime Bush family retainers, and the family’s loyalty fetish has mutated in this generation to the point that it is valued above the good of the nation. But they are not Bushes by blood, and Mr. Cheney would as soon shoot a pal in the face as look at him.
OK, yes, I’m being facetious — about the veep and about impeachment. But serious and likely solutions are scarce right now.
The secretary of defense must go. He should have gone two years ago (as this editorial board said at the time). He went into Iraq with no realistic idea of how to secure the country after the inevitable collapse of the Iraqi army, and hasn’t learned a lesson yet.
Our troops adapt constantly to their adversary’s changing tactics. But Mr. Rumsfeld is too smart 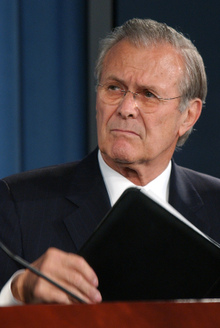 to learn anything. Just ask him; he’ll tell you. If he doesn’t say it out loud, he’ll say it with the set of his stony jaw, the swagger of his shoulders even standing still, the contempt in his aquiline eyes.
You want to talk hubris? Robert McNamara had an inferiority complex next to this guy.
His attitude has always alienated at least half the nation, and pretty much all of our allies. His decisions, his actions and his inactions have alienated many others, including those (like me) who believe completely in our nation’s mission in Iraq, and are sick of watching him screw it up.
His abstract notions of the proper size and shape of the military do not yield to battlefield realities — or to anything else. Sure, he’s right about some things, such as the wisdom of leveraging our exponential advantage in technology and the expansion of Special Forces and other light, flexible elements. But if only he were one-tenth as flexible as a Navy SEAL, or an Army Ranger, or a typical Marine.
But light and high-tech isn’t a slice of the pizza to him; it’s the whole pie. Special ops, precision-guided weapons and air superiority are critically important. But so is securing the country after the battle — sealing potentially hostile (i.e., Syrian) borders, guarding ammo dumps, placing MPs at every important crossroads and on and on (your know, all those low-tech tasks we performed so well across Europe in 1944-45).
This administration went into office promising not to engage in any nation-building, and although that policy ostensibly changed after 9/11, “Rummy” still acts as though he aims to keep the promise. That Iraq has come as far as it has is a testament to the dedication of American troops, and the courage of ordinary Iraqis. (Ironic, isn’t it? In Iraq, civilians risk their very lives for democracy; in America, it’s only our heartbreakingly few young people who serve in uniform. The rest of us get tax cuts and whine about fuel prices that are still lower than in most of the world.)
But isn’t this just more of the ranting from “the anti-war left” that Charles Krauthammer was decrying the other day? He appropriately highlighted the fact that anti-war types who never before trusted anyone wearing stars are suddenly greeting the dissent of six retired generals as wisdom from on high.
Well, you got me, Charles.
Except that I have never been “anti-war” by any conventional political application of the term. (I’m ticked that the military isn’t big enough to credibly threaten Iran or protect Darfur.)
Except that we endorsed George Bush twice. (Although I’m still appalled that the major parties didn’t offer us a better choice.)
Except that I embrace the outlook of real conservatives (such as Lindsey Graham and John McCain, who had to force this administration to remember how the good guys are supposed to treat prisoners).
And so forth.
Look, I’m not any happier than Mr. Krauthammer to see six men who have recently worn the uniform speak against civilian leadership. But in an environment in which civilian criticism is dismissed as coming from the “other side,” ex-military officers may be the only ones with the neutrality to lift us out of the partisan mire. They are credible because they have shunned politics.
Still, speaking up has to feel to them like breaking the code. It all makes for an unseemly spectacle — their broken silence, the media rush to ask other generals what they think, and the Rumsfeld defenders’ rush to point out commanders who support the official line. Generals shouldn’t have had to do this. But we needed someone with standing to do it.
You say you like Rummy? Well, early in this war, I enjoyed him, too. I liked his unapologetic, we’re-gonna-do-what-it-takes demeanor. I even took guilty pleasure in the “old Europe” crack, even though I could see it was strategically harmful.
But over time, it got to where it just wasn’t cute anymore. I didn’t see pride in country; I just saw pride. He’s got to go.