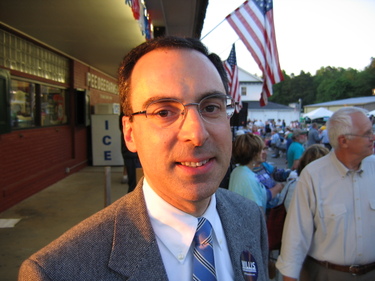 OK, so maybe he’s not a "top leader." Maybe he’s not even a "leader," seeing as how we’re not organized enough to have leaders. We’re in such disarray that we don’t know who our candidate for governor is. Spencer Gantt thinks it’s me.

But at the very least, since he’s one of the few to have expressed sincere interest, we can certainly call him a party stalwart.

So, needless to say, I was taken aback to find him there.

First, he practices internal medicine in Marion, which is right down the road. Even if I didn’t have to go to stuff like this professionally, if I lived in Marion, I suppose I might go out of curiosity. It’s the conscientious thing to do as a voter.

Next, the first thing he said to me — after introducing himself — was "We need to get that party started." I shushed him before anybody could hear us. We will not be strong enough for pitched street battles until there are more of us.

Third, I found his presence there useful, for readers of this blog. As it wore on to 8:30, and I had decided it was time to head home, I asked Paul to keep an eye on the rest of those down-ballot candidates who speak after almost everyone else has left. He agreed, and I split. So we can expect his report at any time, possibly as comments to this item.

Of course, none of those excuses accounts for the "Willis" sticker on the lapel.

How about it, Doc?

Seriously, though — he still talks like a true Unpartisan. Referring to Joe Biden’s speech, he observed, "He talked about sacrifice. I like it when politicians talk like that."

I was about to ask him which politician he has heard say that since JFK at his inaugural, when he added:

"I’m one of the people who got the tax cut" Sen. Biden was deriding in his speech. "And I didn’t really want it."

Of course, he’s not sending it back, he admits. True UnParty ambivalence. The movement lives.

Now, I suppose, I’ll have to write about what Sen. Biden said. But first, I must run to keep an optometrist appointment.