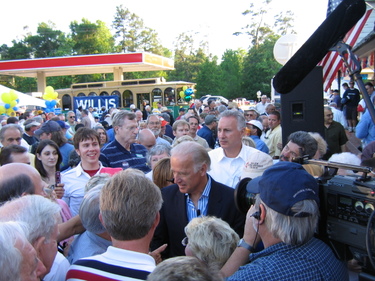 By Brad Warthen
Editorial Page Editor
THE AMERICAN people “have written off” the Bush administration, U.S. Sen. Joe Biden told a parking lot full of Democrats Monday at Galivants Ferry.
“Part of me says ‘good; they figured it out,’” he said. But “In a sense it’s a shame, because we’ve got George W. Bush as our president for the next two and a half years.”
One woman called out, “No, we don’t!”
There we have the two-party system, and all it’s done to America, in three words. I don’t know who it was, but I know the voice of a poster child when I hear it.
It’s obvious, probably even to partisans, that if the guy who’s going to be commander in chief for the next two and a half years is falling apart, it’s probably not a cause for celebration, seeing as how that could be somewhat detrimental to our troops who are laying it on the line overseas. So diehard partisans figure it’s best to deny the situation: No he’s NOT!
That way there’s no problem.
But there is a problem, and as Sen. Biden said, “It goes beyond right and wrong…. This administration is not competent.” You can’t just say he’s-wrong-and-we’re-right-so-let’s-applaud-his-failure. The cost of a failed presidency at this moment in our history is too great for us all.
Some of his speech I had heard — and agreed with — before, such as “History will judge George Bush harshly not for the mistakes he has made… but because of the opportunities that he has squandered.”
Those include the opportunity to pull the world together on Sept. 12, 2001, to “plan the demise of Islamic fundamentalism,” as FDR or JFK or “even Ronald Reagan” would have done. Or to ask us all to sacrifice and shake off “the grip of foreign oil oligarchs,” instead of giving us tax cuts. “Do you believe anyone in America would have refused?”
“Rich folks are every bit as patriotic as poor folks,” he said. “They got a tax cut they didn’t ask for.”
But a lot of what he said was new — he showed me his scribbled notes. And some of what was new, and most welcome, to me was decidedly not the usual fare for a partisan event.
“Did you think you’d ever live to see the day when we would be defined in terms of red and blue” states? We’re “not that way,” he insisted. He blamed Karl Rove for that false construct, but he also — in a gentler way — bemoaned the fact that “the Democratic Party is different from what I remember.”
There are Democrats who want to “make our base more angry so that more will turn out.”
“They may be right; that may be the way to win,” he admitted. But he’s not going that way.
“The country can be reunited.”
Later in the week, he confirmed by phone from Florida that he’s decided to pursue “a general-election strategy from the start.”
“I’m gonna be coming down a lot” to South Carolina, he said. He’s not predicting he could win here, but he’s convinced that to win the White House, a Democrat must “become credible in a dozen or more red states.” By “credible,” he means “45 percent of the vote or more.” He sees opportunities in Mississippi, Arkansas, Colorado, Ohio, Kentucky, Montana and others he rattled off too quickly.
There’s room for a candidate who believes in America in the 21st century and values doing the job right more than scoring partisan points, he suggested. Across the ideological spectrum, “Americans realize they want and are entitled to competent government.”
That the Biden message appeals to frustrated independents there can be no doubt. “He talked about sacrifice,” said Paul DeMarco, a Marion physician and thoughtful regular contributor to my blog, at the Monday night event. “I like it when politicians talk that way.” I wondered how many politicians he had heard talk that way since January 1961, but I kept quiet because he was on a roll. “I’m one of the people who got the tax cut,” he said. “And I didn’t really want it.”
It was a good October 2008 speech. Will Sen. Biden’s fellow Democrats let him get that far? I don’t know. But he got a warm welcome by the banks of the Pee Dee last week. It took him an hour after his speech to tear away from all the well-wishers.
Of course, these were South Carolina Democrats, and he was the guest of honor, and it was the sweetest weather I’ve yet seen at a Stump, and some of the Styrofoam cups in the hands of Inner Party members contained something that smelled a lot stronger than RC Cola, and I couldn’t head back to Columbia until I’d stood for a moment with hostess Russell Holliday doing nothing more active than frankly admiring the way the razor-cut sliver of moon rose over the piney bottomland in a sky so deep-ocean blue…
I’ve also been in Iowa in January. It’s different. We’ll see. 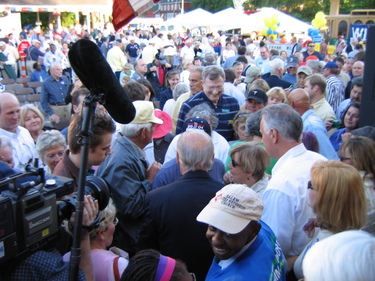