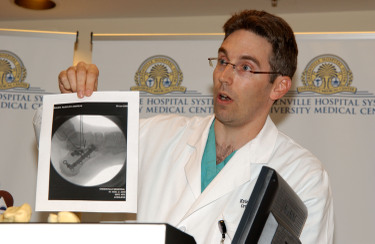 Which reminds me of my post from last night.

I’ve never known quite what to make of the fact that you’ll sometimes hear lawmakers defending Mr. Bauer on the basis that he’s doing a good service with the Office on Aging.

There seems to be
some circular reasoning involved. Old folks were being served by that
agency before. Lawmakers, searching for something to give Andre
that he could take credit for, arbitrarily moved it to his office. Once
they moved it there, Andre went around letting old folks know what a
great job the people who now worked for him were doing for them, and
they praised him for it.

Lawmakers then started giving Andre credit for it all, thereby self-fulfilling a prophecy.

Anyway, that’s the cynic’s view. Andre claims all sorts of
restructuring and reform of the agency and its service, plus a greatly
expanded budget this last round, and says it’s all due to his
"leadership." Whether it is due to his efforts or not, I don’t know.

But my new boss did ask an interesting question when Andre was
talking about that in his Wednesday interview with us: Is the Office on
Aging now enjoying an advantage over equally vital and worthwhile
agencies, just because it has a high-profile advocate — one with every
motive to have his own area of influence grow, I might add — wielding
the gavel for it in the Senate?

Andre allowed as how he didn’t think that was the case. OK, then: If
it isn’t benefiting from that relationship, to what extent is his
position over the Office of Aging doing anything for his clients that
wouldn’t get done by that office anyway? Circular reasoning again.

All I can tell is that the lines of accountability are now muddier than before.