Man, I thought I’d never write a post with "Ann Coulter" in the headline — the wars of the ideologues interest me only to the extent that I sometimes find them morbidly fascinating. As in, "See, that’s what wrong with the country!"

I must have been in one of those moods, because I finally gave in to the fact that she had been 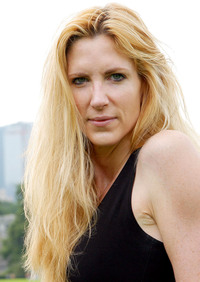 mentioned repeatedly in recent days in comments on this blog, and always in a context that suggested that everybody else but me knew why she was the subject of the day. You see, I’ve been sort of busy right here in South Carolina. In any case, I’ve never read anything by Ms. Coulter (does she mind being called that, by the way?). Nor have I seen her on the telly, but I’ll just bet she’s one of those shouting heads I don’t see because of not having cable.

Anyway, I Googled her (and is it OK if I say that?). And I’m guessing the reason folks are talking about her so much has something to do with this. She must have really gone over the line if the National Review is saying this about her:

Apparently, in Ann’s mind, she constitutes the thin blonde line between freedom and tyranny…

Oops, no. I see that it must be something else, because that’s from way back in 2001. It must be this
— which I found on the old-fashioned wire service. If it was something else, perhaps y’all can enlighten me, if "enlighten" is the word.

But more interesting to me, and the only reason I am invoking the woman’s name, is that I clicked on her official site, and checked her archived writings. I immediately clicked on one of the more inflammatory-looking headlines, and found this. No, not the article — I didn’t read that. I’m talking about the little ad at the top, the one that says:

You click on it, and you get his Web site.

Interesting choice of an advertising venue. I would think there were better ones for reaching a South Carolina readership, but what do I know?

201 thoughts on “Oscar and Ann Coulter”