Choosing the steak over the sizzle

KAREN FLOYD is the sizzle; Bob Staton is the steak.
Carve it any way you like, that’s what you end up with in the GOP race for superintendent of education.
Mr. Staton proposes (yawn) to push ahead on the sweeping, fundamental reforms that he and other business leaders initiated. The ones the education establishment’s defenders fought so hard. 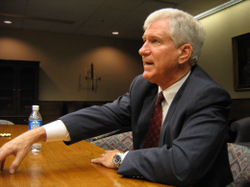 The ones that are working.
They proposed to set some of the highest standards in the state (which South Carolina has done), to test every child to make sure the schools teach those standards (which South Carolina is doing), and to bring the schools where kids aren’t meeting those standards up to snuff (which South Carolina has hardly begun to do).
Continue pulling the schools up to high standards? Sounds like a lot of hard work, doesn’t it?
Mrs. Floyd says things people like to hear. She’s a lawyer, but seems born for sales. As was said in the Charleston Post and Courier, she “has polished her presentation to a bright shine.”
She is very open-minded. One of her best, most sizzling lines goes like this: “Given the state of education in South Carolina, it would be irresponsible to prohibit any reasonable idea, any possible solution from consideration merely out of a fear of change.”
Sure. But what’s “reasonable”? There’s the rub. Mrs. Floyd is really reluctant to draw that clear line. When she finally does, she draws it in the wrong place.

Look at last week’s ETV/The State debate. I asked Mrs. Floyd whether her endorsement by Gov. Mark Sanford — whose one big idea with regard to public schools is to pay people to pull their kids out of them — meant that she was “completely in sync” with his education agenda.
“I am absolutely a free thinker,” she said, noting that “there’s a wide spectrum” of views among her supporters … .
But would she have voted, given the chance, for the governor’s proposal to give tax credits to private school parents, a plan called “Put Parents in Charge”?
“You know, I purposefully have never discussed the PPIC legislation.” She would pull together all the stakeholders, and “put together a ‘choice’ program that would fit the needs of the state of South Carolina….”
“But you didn’t really answer the question,” host Andy Gobeil objected.
She said PPIC was “a moving target constantly,” with 42 amendments. She hadn’t wanted to “anchor” herself to what “may not be the final position.”
I tried again: “But in the end, there was an amended — much amended — piece of legislation, and lawmakers did have to vote on it. And they had to say ‘yes’ or ‘no.’ So on that one that was finally voted on — this year, let’s say; let’s be specific: Yes or no?”
She stopped sizzling: “The piece of legislation that was voted on this year, the last piece of legislation, was one that I would have supported, yes.” She had not wanted to answer that.
“I did not support PPIC,” Mr. Staton answered. He went on to say we have to focus on improving

our public schools, and that the problem with South Carolina is that every time we undertake a reform we abandon it before we’ve fully implemented it, and… I cut him off. I had my answer.
Why the big deal on this one thing? You might just as well ask Mrs. Floyd that, since she was the one dodging it, but I’ll provide the answer: This is the one substantive point on which Mrs. Floyd and Mr. Staton differ. They both know that. To the extent that this race turns on issues of any kind, that point is the pivot, the fulcrum.
And the stakes for South Carolina are incalculable.
This is why the governor — who fundamentally does not believe in public schools — endorsed Mrs. Floyd last year, long before he could have known who else would be competing for his party’s banner. It’s why out-of-state anti-public school interests have pumped loads of money into the campaigns of not only Mrs. Floyd, but of anyone who will run against any Republican lawmaker who has had the guts to stand up and vote “no” to their proposal.
For them, it’s the end-all and be-all. It is for our schools, too. And it is for you, whatever your political affiliation.
If you’re a Republican, a vote for Bob Staton is a vote for South Carolina’s right to determine its own future. To vote for Mrs. Floyd is to side with out-of-state extremists who have vowed to take out any Republican who dares disagree with them.
If you’re a Democrat, and you actually care about improving public schools (as Democrats always say they do), you’d better vote in the Republican primary for Bob Staton, rather than wasting your vote deciding whether Tommy Moore or Frank Willis will lose to the governor in the fall. This is the one that counts. 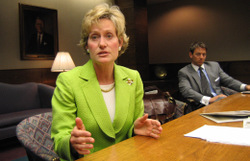 And if you are an independent, this is your chance to step in and say that the public schools belong to you, too — not just the ideologues of various stripes.
Mrs. Floyd is an intelligent, delightful, charming woman who is open to all sorts of good ideas. But she’s also open to one horrendous idea that undermines all the rest. It takes all the gloss off her “bright shine.”
Mr. Staton doesn’t glow. He sweats, doing the heavy lifting of making all of our schools better.
It’s not a very shiny proposition, but it’s a meaty one.