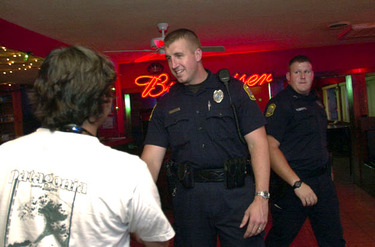 I seldom write editorials (and if anyone needs me to explain the difference between an editorial and a column, I will). They’re mostly written by Associate Editors Warren Bolton, Cindi Scoppe and Mike Fitts. But when a hole in our schedule emerged yesterday — and the hole was in today’s newspaper — and we talked about ideas that we might address, and I said "I’ll do that one," my friends and colleagues cried "Sold!" with an alacrity that suggested that some of them think I don’t do enough around here.

Well, I showed them.

Here’s the editorial, with links. Maybe it will provoke a little discussion in this venue:

The grownups
strike back
in Five Points
ONE OF THE greatest needs in America in the 21st century is something we used to take for granted — grownups. In a time when everything on TV, from “reality” shows to celebrity-and-sensation-soaked “news” to you-gotta-have-it-now commercials, screams immaturity, one wonders where the grownups have gone.
The situation takes on infinitely greater urgency when our front pages tell of drunken children dying in car crashes, of a mother giving other children alcohol
and encouraging them to have sex, and of still others “accidentally” killed in the crossfire of warring gangs.
And that’s just in the Midlands. The whole world seemed to catch its breath for days on end when a twisted head case insisted that everyone believe he raped and murdered a 6-year-old whose death is an object of obsession because her parents made her up to look like a full-grown woman for beauty pageants.
Where, indeed, are the grownups? The adage “It takes a village to raise a child” assumes the presence of watchful grownups sharing a communal concern for the children of the society growing up safely and sanely into the kinds of responsible adults who will in turn work together to protect and teach the next generation.
Obviously, the mere fact of chronological majority — turning 18 (an “adult” for

car rental companies) or 35 (to be president of the United States) — doth not a grownup make. Chronological “adults” are a huge part of the problem. The woman accused of encouraging drunken bacchanalia at her house is 46.
A grownup is someone who knows how and when to say “No” to a child who insists that “I can do whatever I want” — whether that child is 2, 16, 18 or 46.
Well, fear not. There are still grownups in charge, at least in Five Points this past weekend.
That’s where and when Columbia police — acting in behalf of the grownups of our community to protect both children and the rest of us from some of adolescents’ more dangerous behaviors — staged their “Welcome Back” operation.
This crackdown on underage drinking led to 160 charges including DUI, having open containers and public drunkenness. Twenty-eight people were arrested and charged specifically with underage drinking.
The place and the timing were perfect. Smart grownups set out boundaries ahead of time to avoid bad behavior before it really gets out of hand. This was the first weekend after classes had started at the University of South Carolina, and the best time ever to let students — especially freshmen overwhelmed with the freedom of being away from home for the first time — know that there are rules, they exist for excellent reasons, and they are to be obeyed.
Those who run Five Points bars and restaurants seemed to welcome the police presence, and said they were doing their bit to prevent underage drinking as well. Good. Grownups should work together.
Sometimes kids, particularly of the adolescent variety, feel like the whole grownup world is involved in a conspiracy to keep them from doing what they want. When “what they want” involves behavior that is a threat to their lives and those of others, it’s a good thing to know they’re not just being paranoid.
Congratulations to the Columbia Police Department, and to grownups everywhere who are still willing to draw the line wherever it needs to be drawn.