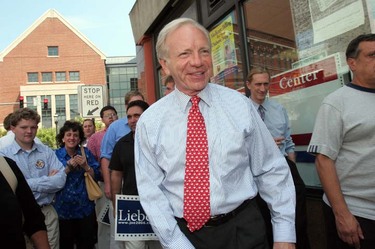 One state’s voters get chance
to break partisan death grip

A WONDERFUL thing happened in Connecticut last week — something that could bode very well for the political direction of this country:
A man who six years ago came within a hair’s breadth of the vice presidency broke with the partisan insanity represented by the Democratic and Republican parties and launched a general election campaign for the U.S. Senate that he has a good chance of winning.
If he succeeds, it could change everything. It would show sensible people that it is possible to take our country back from those with an interest in keeping us bitterly divided — the parties, advocacy groups, 24-hour TV news and a bunch of self-justifying idiots in the blogosphere.
The exciting thing about Sen. Joe Lieberman’s independent candidacy is that voters are actually going to be given the option of voting for a viable, highly qualified candidate who was not chosen by a vote of extremists on either the “right” or the “left.”
In fact, that system actually chewed him up and spit him out. As qualifications go, I’d put that right up there along with his 35 years of thoughtful, principled, sterling public service to his state and to his nation.
Do you still doubt that the two parties have lost their narrow little minds? How can you, when the proof was on such stark display last week? (And not only on the Democratic side. A Republican 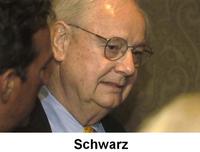 congressman in Michigan was expelled for being too centrist.)
The ultimate proof was not Sen. Lieberman’s primary defeat by a rich political neophyte whose only qualification was a capacity to tell the more extreme elements of the Democratic Party what they want to hear. (Supposedly about the war, but the senator’s real “sin” was daring to agree with the hated George W. Bush.) That was just the warmup.
The real craziness started when all the “mainstream” Democrats who had supported Joe Lieberman in the primary, and had in fact seen challenger Ned Lamont as a harmful force, endorsed the winner.
Among those individuals who surrendered their consciences to “party unity” were Bill and Hillary Clinton. You know, fellow Democratic Leadership Council stalwart Bill Clinton — who had stumped for Mr. Lieberman in person in recent weeks — and his wife the senator, who has been almost as identified with support of our effort in Iraq as Sen. We-No-Longer-Speak-His-Name.
Not long ago, Senate Minority Leader Harry Reid begged Eli Pariser not to oppose Mr. Lieberman, for the sake of the party and its chances of retaking the Senate. After last Tuesday, he announced that “The results bode well for Democratic victories in November.” Ow. Whiplash.
You don’t know who Eli Pariser is? He’s the 25-year-old who heads up MoveOn.org, a major force in the left wing’s push to dominate the Democratic Party. His take on the situation was typically, dogmatically priggish: “This puts the political class on notice that they have to pay attention to people outside the Beltway.”
Young Eli hasn’t noticed that most politicians pay minute attention to “people outside the Beltway,” letting polls override the judgment they are elected to exercise. Nor does he understand that most people outside the Beltway have very different values from those held by him and his friends in the blogosphere.
Joe Lieberman is one of the rare pols who actually sticks with what his conscience dictates. This is frowned upon within the Beltway, where you’re supposed to surrender judgment to whichever howling mob claims you.
Some Democratic leaders — and some in the media — act as though Joe Lieberman is the deluded one. In a story called “Lieberman defiance,” The Associated Press quoted various “analysts” in an effort to diagnose the senator’s inability to “accept the reality of defeat.”
“He was in denial,” said one political scientist. Former Clinton Chief of Staff Leon Panetta said of poor ol’ Joe: “You have to, in some ways, kid yourself. It’s more a psychological mechanism than it is reality.” The general consensus was that the shock of defeat had pushed him over the edge.
Think for a moment, people. “Poor ol’ Joe” has more money, more support in the general electorate and far greater qualifications for office than either Ned Lamont or his Republican opponent. That was true Monday, and it was just as true Wednesday. One would only say otherwise if one believes the momentary whim of a party is more important than the good of the nation.
How did it become conventional wisdom that people doing all they can to defeat a fringe candidate one day — for the very good reason that he would be bad for the state, the nation and their party — should embrace him the next?
The dynamics that boosted Mr. Lamont to victory, and that induced “mainstream” politicos to go where only the likes of Eli Pariser and Al Sharpton would go before, are precisely the same ones that keep giving us choices between, say, George W. Bush and John Kerry. Seldom do those of us who are revolted by the options forced upon us by the extremists who dominate primaries get the opportunity to choose a candidate we can respect.
Well, the voters of Connec
ticut now have such an opportunity. I hope they appreciate it.