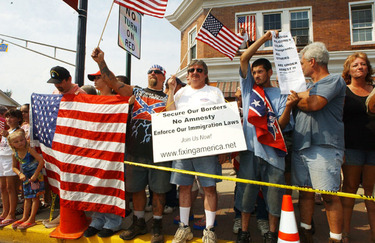 It’s not what you think; this was shot in New Jersey.

Greatest threat to U.S.
is immigration? Since when?

WITH CONGRESS on break, U.S. Rep. Gresham Barrett has been meeting with his 3rd District constituents. So what’s on their minds?
“Immigration” comes in first.
Second, he says, is “immigration.” Third is immigration. It’s also fourth.
And he supposed that “the war” maybe came in fifth. I’m sure our troops over there will appreciate making the Top Ten.
He admitted that he was being “a little facetious.” The war is “a cloud” casting its shadow over everything political. But there are no clouds on the stark immigration landscape. There, you’ll find nothing but a blinding, hot interrogation lamp surrounded by shadows. If you give the wrong answer, there are a lot of GOP voters out there ready to cast you into the everlasting darkness.
“Wrong,” of course, can vary, depending on whether you’re a lobbyist for the big business types who have been the GOP’s bread and butter for generations, or one of the salt-of-the-earth folk who crowded into the Big Tent in recent decades and created the vaunted GOP majority.
The main question I have on the subject is one that neither Rep. Barrett nor anyone else has answered to my satisfaction:
How did this issue become such a big deal all of a sudden? What changed? We’ve had Mexican tiendas in our neighborhoods, even in South Carolina, for much of the past decade. For even longer, it’s been hard to communicate on a construction site without a working knowledge of Spanish. Our last two presidents could hardly put together a Cabinet for all the illegals their nominees had employed as nannies.
Over the last 10 or 20 years, there’s been a huge influx. But what changed in the past 12 or 15 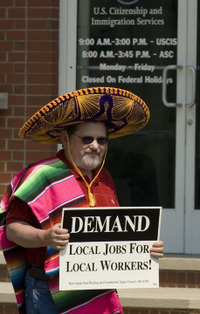 months? As near as I can tell, looking at the real world out there, nothing. But in the unreal world of politics, it’s as though, sometime during the summer of 2005 or so, a huge portion of the electorate suddenly woke up from a Rip Van Winkle catnap and said: “Whoa! Why are all these people speaking Spanish?”
There were always a few who considered illegal immigration Issue One. On the left, you had union types concerned about cheap labor depressing wages and working conditions. On the right, you had culture warriors furious at hearing anything other than English spoken in the U.S. of A.
On both sides, drifting amid the high-sounding words about fairness and the rule of law, there was a disturbing whiff of 19th century Know-Nothingism.
I had one or two people who e-mailed me about it regularly, always furious at us for taking the “wrong” position on the issue — even though, until it moved to the front burner back in the spring, we didn’t have a position on it.
Nor did Mr. Barrett consider it a priority, until late 2004. At least, none of the thousands of news outlets whose archives are available on Lexis-Nexis report his having a burning concern.
During the past year, his name and the word “immigration” showed up 53 times. In the previous year, only 20 times. In all previous years, 40 times. Back when he was first running for Congress in 2002, he was talking about keeping out terrorists, mainly from such places as Iran and Iraq. In fact, opponent Jim Klauber blasted him for paying too much attention to countries “where terrorists come from,” while ignoring “the greatest problem in the 3rd Congressional District” — which, to him, was illegal immigration from Mexico.
But now, and for the last couple of years, Mr. Barrett has stood foursquare behind the House’s “enforcement first” approach. He demonstrated his deep concern most recently by visiting the border personally, just before coming home to see constituents. So when he got an earful, he was prepared.
But I wasn’t, probably because I don’t watch TV and therefore haven’t had it explained to me by Bill O’Reilly. I still find myself wondering: Where did all these angry people come from? The ones who weren’t even talking about this issue a year ago, but now promise to toss Lindsey Graham out of the Senate for actually recognizing that this issue is really complicated.
How can anyone see this issue in black-and-white terms? Hey, I want to see the laws enforced, too. But I know that a nation that can’t find one guy in the mountains of Afghanistan isn’t going to round up 10 to 20 million people walking the streets of the freest, least-controlled nation in the world.
Yes, it’s theoretically possible to round up most of them. The Nazis probably could have achieved a success rate of 80 or 90 percent. And it’s probably possible to build a 2,000-mile fence that would be more-or-less impassable. China did it.
But at what cost? I’m not even talking moral or spiritual cost, in the sense of “what kind of nation would that make us?” I’ll let somebody else preach that sermon. I’m talking hard cash.
Look at the national debt. Look at our inadequate presence in Iraq and Afghanistan. Check out the rising power of nations such as Iran, Russia and Venezuela, whom we are making impervious to international pressure with our insatiable thirst for petrol. Note that we don’t have the military assets to make Iran take us seriously when we suggest it should stop working on nukes for terrorists, or else. Or else what?
Let’s talk priorities, folks, not fantasies. The “invasion” that endangers this country isn’t a bunch of people looking to (gasp) sweep our Wal-Marts to feed their families. It’s Londoners getting on a flight at Heathrow with bogus tubes of Prell in their carry-ons.
Illegal immigration is a serious problem, when it gets to where you have 12 million aliens you can’t account for. Having our labor market, wages and working conditions distorted by a huge supply of cheap, illegal labor is also a serious problem. So is the fact that our neighbors suffer such crushing poverty that they will risk their lives coming here just to have their labor exploited.
But not one of these things is the most urgent problem facing this country. Not a year ago, and not now. 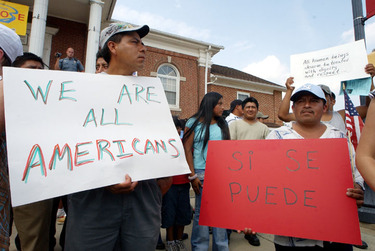 308 thoughts on “What’s all this then about immigration?”