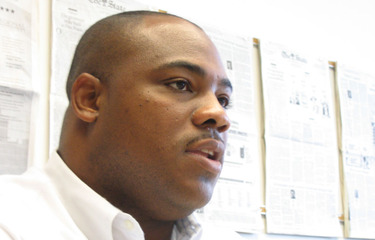 Wednesday, 10:45 a.m. Our second candidate of this election season could hardly be more unlike the first if they had teamed up to do it on purpose. Anton Gunn holds precisely the opposite view on property taxes — he believes they were cut too much by the action in the recent legislative session, and that the burden was shifted to the wrong tax altogether. Lawmakers should have increased the income tax, rather than the already regressive sales tax.

He is also highly knowledgeable about almost every current issue before the Legislature, with extensive experience wrestling with various agencies in the executive branch as well.

This might make for an easy choice if these two men were opposing each other, but they are not. Mr. Gunn is facing a Republican incumbent we also like a lot — Bill Cotty.

Mr. Gunn, whom we endorsed in the June Democratic primary, was one of the more impressive candidates we spoke with in that cycle. I had not known him before, and I was highly impressed with his knowledge, his energy, and his zeal to transform South Carolina into the best of all the states.

He is a big man — a former lineman for the Gamecocks — and he does not think small. "What will our state be like in 2026?" More importantly, what do we want it to be like, and "Who has the vision" to get us there? He says repeatedly that he wants to get South Carolina "past the status quo," in which we have been trapped by lawmakers going for the cheap and easy, not for the best long-term strategies. He says we’re caught in this status quo in part because of "McDonald’s policies." A fast-food burger looks good, smells good and tastes good. Kids love it. "But what happens if you eat it for 10 years?" He says current policies in S.C. are no more nutritious, however appetizing they may seem at a given moment.

He says Mr. Cotty’s principled opposition to "vouchers" for private schools isn’t the same as being for public schools, and he repeatedly says it’s better to define yourself by what you’re for than what you are against. He proposes "signing bonuses" for the best teachers when they go to the worst schools. He wants teachers to have to face their peers’ assessment as well as those of their supervisors. He wants teachers who are letting the team down to be shown the door: "People need a job and they need to make a living. If they aren’t doing that job, you need to help them find another way to make a living." He stops short, however, at letting principals fire teachers at will, preferring the principal to have "significant weight" in a multilateral decision.

He calls health care "the sleeping giant," noting that everybody — from patients to businesses to care deliverers — suffer from the problems in our current system, one way or another.

He is appalled by the recent tax "reform," which moved school funding from the reliable property tax to the volatile sales tax. He says it’s like a breadwinner with a family to feed jumping from a good, steady salary to working on 100 percent commission — it puts the family’s needs at risk. (Mr. Gunn loves analogies.)

And more to the point, "Bill Cotty is the one who sponsored that tax reform bill. He’s the one that wrote it out on the back of that chicken box."

"When I win — and I do think I’m going to win," Mr. Gunn says, "the first meeting I want to have is with Bobby Harrell… to help me understand … what is your vision for South Carolina? How do we get to be the great state we can be?"

He calls himself a bridge-builder who would call upon his years lobbying on behalf of the disadvantaged (as director of SC Fair Share) and similar experiences to help him find the keys to working with other lawmakers of all stripes.

Anton Gunn is nothing if not confident. He dismissed the effect of a third candidate expected to pull votes from Mr. Cotty on the right: "I expected to win by 500 votes. With him in the race, I might win by 800 or 900."