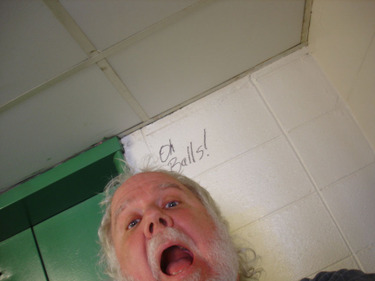 This is one for you art lovers out there. My roommate from my USC days recently took part in the special pre-demolition reception for former inmates of the Honeycombs. He will remain nameless for now — all I will say is that he was an art major, and that is him at the bottom of the above image.

As you see him, he has just restored a graffiti work from his early Gonzo-minimalist period — or restored it as well as he could, working in a hurried fashion before the university authorities could notice he had slipped away from the group.

By the way, my roommate was the responsible one in our duo — he kept his side of the room spotless, with all his art supplies neatly stacked and categorized, his clothes put away in the closet. He was the one with the short, conservative hair. I think he even used to make his bed.

My side looked like a waste dump, featuring pots with week-old food cooked on with my contraband hotplate, sloppily-hung posters and dirty clothes. The finishing touch was my mountain of State newspapers, not one of which I ever tossed, constantly spilling over to his side, and earning me the sobriquet "Ratso Rizzo" (we had both seen "Midnight Cowboy" over at the Russell House). He still calls me that, even though I’ve cut my hair and shaved.

Connoisseurs of early-1970s, 4th-floor Snowden culture will recognize the above hastily-penned reproduction as only dimly evocative of the original, once-thought-to-be-immortal work that was scratched deeply into the paint that coated the concrete-block wall. It was located over the elevator immediately across from our room, and was still there when I took my bride by there on our honeymoon three years later. I was proud to play the docent and explain to her the history behind this treasure. She was suitably impressed, I think — she was speechless.

Unfortunately, the original was lost to a later renovation of the building — probably about the time they put those sissy dividers in to make separate shower stalls in the floor’s one bathroom.

But all is not lost! My roommate and I are planning a guerrilla revisit to the site in the next few days, and hope to restore the original to its rightful place, so that the building’s boisterous spirits will lie at rest when the Big Crash comes. If you would like to help in bringing about this once-in-a-lifetime testament to the (adolescent) human spirit, your cash gifts can be sent to this blog.