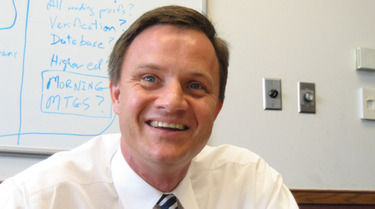 Wednesday, 1 p.m. Longtime GOP House leader Jim Harrison made a mistake: He made Boyd Summers mad at him, and as a result, he has an energetic, well-informed and highly motivated Democratic opponent in the November general election.

Mr. Summers a native Columbian and software executive, is mad about three things:

Having "told you what kind of a son-of-a-gun" his opponent is, he went on to say what Boyd Summers would do in office. He would concentrate on getting lawmakers to concentrate on essential services, which have been grossly neglected in recent years. Rather than funding the Hunley, beach renourishment and football stadiums, "how about funding the Highway Patrol?" Or our prisons, so we can "keep the bad guys in." Or mental health services, so that the mentally ill don’t clog up our emergency rooms.

He would do something about the fat and duplication in our public higher education system, and look at consolidating some school districts — although he hesitates to say Richland County has too many with two.

On tax "reform," he said lawmakers start from the wrong direction. "They started from, a lot of people want property tax cuts." They "need to start from, What do the schools need?"

Seeming to recite something I have often written, he said the role of the lawmaker is to ask, "What do we have to do, what services do we need to have, and what’s it going to take to get there."

"We have got to get away from partisanship," he said. "My opponent has governed hard right. Our district wants common-sense solutions." An example? The failure to raise the cigarette tax, as most of the public clearly wants lawmakers to do.

He also believes in continuing the restructuring reforms started by the late Gov. Carroll Campbell, but neglected by present legislative leadership.

"We’re a very Legislative State, and look at where that’s got us."