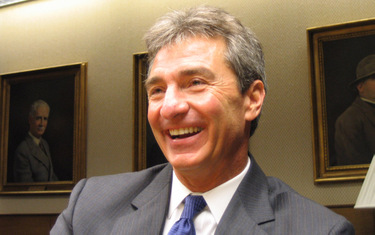 So why is this man smiling? Well, for one thing he’s an upbeat kind of guy. For another, he has good cause: This race would be a yawner if not for the interesting bit of news Drew Theodore uncovered with regard to incumbent Comptroller General Rich Eckstrom — you know, about how he used a state vehicle and state gas card to take his family on vacation in Minnesota or someplace else so far up north it’s ridiculous.

That, together with Mr. Eckstrom’s penchant for other odd behavior and his lack of social skills, could put the son of the former lieutenant governor in range of victory. Since that means he’d have a seat on the Budget and Control Board, this becomes interesting.

Mr. Theodore says the comptroller general’s office was set up to be an independent fiscal watchdog on state government, "looking at priorities of where the money is being spent." This, he believes, Mr. Eckstrom has not been — not even counting the vacation thing.

He said Mr. Eckstrom, an accountant, is micromanaging the office. The Democrat says that by contrast, he would — as an elected official — concentrate on issues of policy, and let the financial professionals in the office run the day-to-day.

"Policy" is why he believes (unlike me) that the office should continue to be elected, so that there is a fiscal officer with independence. "I think there ought to be an office," either treasurer or comptroller, "elected independently so the governor and the General Assembly know they have somebody looking over their shoulders."

He also defends the hermaphroditic Budget and Control Board, but his logic smacks a bit of longing for forgotten days gone by: "When the system and everybody is getting along, it’s a good thing to have." In other words, the only problem to him is the personalities of some of the members, not the fact that it confuses and entangles the separate functions of the executive and legislative branches.

"It worked before with different parties and different agendas," just not now. "There’s a lack of respect within the board. They’re doing these protest votes." That was a reference to what he sees as symbolic, contrarian gestures by the governor and Mr. Eckstrom against the other two Republicans and one Democrat on the board.

He says he agrees with a lot of things Gov. Sanford wants to do — such as "when he says there are parts of government we should reduce" — and doesn’t understand why he doesn’t work better with people to try to accomplish some of them. "If you really believe what the governor is trying to do, find a way to get it done."

There are contrasts with the governor as well. "I also believe there are some areas where we need to put more resources in," he said. "He (the governor) probably totally disagrees with that."

Beyond that, Mr. Theodore says he would use the office to help local governments, and the state, with economic development.

He would reinstate a hotline for whistleblowers that he said the office used to have under Earle Morris. He said such a setup would be even more effective today, what with e-mail and other formers of modern communication.

He went on at some length about ways to reform health care, using models from other states, including Massachusetts. The idea is to form pools in which uninsured folks who work for state government get together to achieve economies. He would raise the cigarette tax to get that started.

He finished up talking about Mr. Eckstrom’s vacation. "He holds himself out as looking out for government waste, but he" does things like this. Where he took it too far (in terms of whether he got away with it or not) is when he used the state gas card, because "that’s how we tracked it."

"He signed the car out saying he wasn’t taking it out of South Carolina," said Mr. Theodore of his opponent. "If he’s a CPA and he didn’t pay taxes on the use of those two vehicles, then he’s got more problems than just being comptroller general." 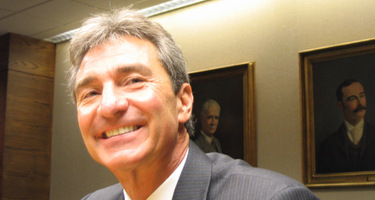