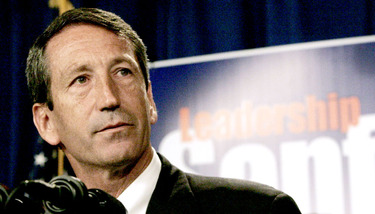 Mandates: From Sanford
to Pelosi to Lieberman

ANYBODY WHO thinks there was any one theme, message or lesson from Tuesday’s elections has a few more thinks coming. Let’s start with these:

The Sanford Mandate. Gov. Mark Sanford’s victory statement Tuesday night was the best speech I’ve ever heard him give. I’m hoping to hear more of the same. He talked about a mandate, but with a tone of humility. He said it was a mandate for “change,” and I think he was right. What he did not mention was the plan to privatize public education, and with good reason, given the results in certain other races across the state. That still leaves us with government restructuring, and if the governor pushes as hard on that in the next four years as he has said he would, I’ll be cheering him every step of the way.

Real education reform. Despite her long head start as the governor’s anointed “choice” standard-bearer, despite all those tens of thousands in campaign cash from out-of-state ideologues, despite having that crucial “R” after her name, Karen Floyd was slightly trailing Jim Rex in the superintendent of education race. It could still go either way. Does that mean the voters sent an uncertain message as to whether they want education reform? Absolutely not. The wisest course for the winner of this race, the governor and lawmakers would be to embrace the common-sense reforms that both of these candidates talked about, such as merit pay for teachers.

Bill Cotty survives. They tried to do him in in the GOP primary. When that didn’t work, they tried to take him down in the general by running an independent candidate to split the Republican vote. They flooded his state House district with one slick mailing after another, accusing him of everything they could think of short of having WMD. But the most obvious House Republican opponent to private school vouchers and tax credits withstood everything they could throw at him, and prevailed. And consider this: His Democratic opponent, Anton Gunn, was just as strongly against their agenda as Mr. Cotty was. That means that in spite of all that out-of-state money and effort, 87 percent of the voters utterly rejected their agenda. The people of District 79 love and appreciate their public schools. And they are far from alone.

Eckstrom’s vindication. So how does a guy who calls himself a fiscal watchdog (which is just what a comptroller ought to be), then takes a long family vacation in a state vehicle on a state gas card, then dares to run for re-election as a fiscal watchdog again manage to win? Here’s how: He got voters to believe his whining that he was being picked on, that the criticism of his Minnesota road trip was just the pettiest kind of political nit-picking. Well, it wasn’t. He broke faith with the voters, he never thought it was wrong, and now that he’s gotten away with it, he seems less likely than ever to learn anything from the incident.

The national picture. Everyone says the Democrats’ congressional victories are about Iraq — but what does that mean? Those of us who have backed the war from the start have demanded changes in the way the war has been prosecuted since early on. We’ve been demanding, for instance, that the president dump Donald Rumsfeld. (Mr. Bush got that message right away — three years late, but he got it.)
After all that talk about the war, I’ve yet to hear specifically what Democrats think the voters want them to do. I heard Nancy Pelosi and John Murtha on the radio Wednesday morning. Pretty nonspecific. They want “change.” Nobody’s saying pull the troops out. The party’s most agitated wing will be flapping for that, but wiser heads know better: If that was what the people wanted, Ned Lamont would have won in Connecticut.
I think the country was rejecting the bitter partisanship of the last few years, of which the president and Speaker Dennis Hastert are prime examples. Voters want people who will work across ideological lines to the betterment of the country, both at home and abroad. They reject the Ned Lamonts on the left and the Rick Santorums on the right. They want common sense, not MoveOn.org or Rush Limbaugh.
Who were the Democrats who won? Pro-life candidate Bob Casey in Pennsylvania. Fiscal moderate John Spratt right here in South Carolina. The extremists need to take heed, or prepare to lose the House again in the next election — or the one after.

Joementum! Yes! I practically shouted it out during the live election-night broadcast on S.C. ETV. Joe Lieberman did it! He showed that the right man with the right ideas (including the will to win in Iraq, take note) doesn’t need a political party to win high office.
This is a start. All the U.S. Senate needs now is 50 more like him. Then you’ll see me jumping up and down the way the Democrats are doing nationally, and (most) Republicans are doing in South Carolina. Why? Because for the first time ever, my party will have its chance. I promise you here and now, given that opportunity, we will not let the American people down. 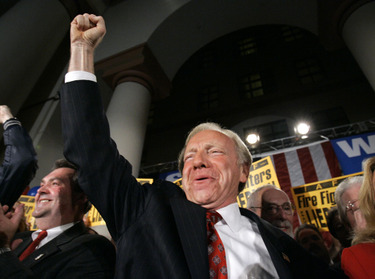