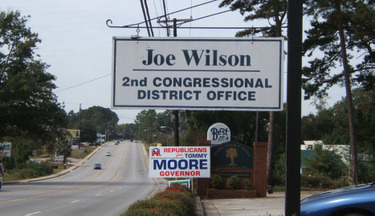 You may have noticed the brief item in today’s paper under S.C. Politics Today that noted the fact that, as shown above, there was a "Republicans for Tommy Moore" sign out in front of the building where U.S. Rep. Joe Wilson‘s congressional offices are located, on Sunset Boulevard in West Columbia.

The above picture was taken by Mona Chamberlin, The State‘s governmental affairs editor.

Not knowing that she had shot that previously, I resolved to take my own picture today on my way in to work, since I pass the spot almost daily.

So I turned in to the building’s parking lot, got out, walked around to try to get a shot with the smaller Wilson sign in the foreground (as Mona did), and whoa — there was no Wilson sign. That thing’s been there for years, and it was just gone.

I guess Joe decided he could disassociated himself by removing himself from the picture more easily than getting his landlord to ditch the other one.

I shrugged and walked back to the car, and only as I was driving off did I decide it might be good to have a picture of what wasn’t there, so I shot the image below through my vehicle window. Hence the bad angle and lower quality. But if you look closely, you can see the sign frame and little empty hooks dangling, even though it’s all kind of camouflaged by the trees and power lines. Use Mona’s picture as a guide, keeping in mind that mine’s shot from a lower angle.

Politics is weird, ain’t it? 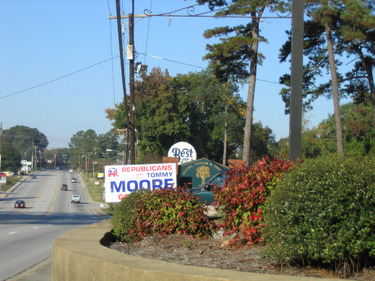 One thought on “Joe says it ain’t so”