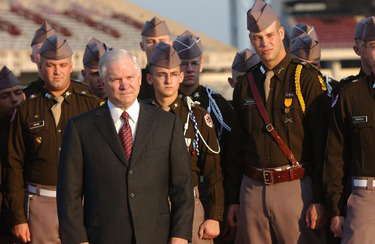 The return of the professional

By Brad Warthen
Editorial Page Editor
“AMID TAWDRINESS, he stands for honor, duty and decency,” another author once wrote of John le Carre’s fictional hero George Smiley.
George was the master Cold Warrior brought back in from retirement to save British intelligence from the liars, self-dealers, ideologues, social climbers and traitors who had turned it inside out. He did so quietly, humbly and competently. Then he went his way, with little gratitude from the system.
With Robert Gates’ nomination to replace Defense Secretary Donald Rumsfeld, old George seems 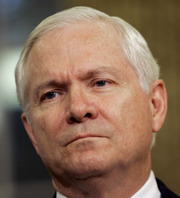 to have come back in from the cold yet again, although in different form.
Mr. Gates is a Smileyesque professional. He was the only Director of Central Intelligence ever to have come up through the ranks. He had spent two decades in the Agency, from 1969 through 1989, with a several-year hiatus at the National Security Council. He received the National Security Medal, the Presidential Citizens Medal, the National Intelligence Distinguished Service Medal (twice) and the Distinguished Intelligence Medal (three times).
I trust professionals, particularly those who have devoted themselves to national service. Not in every case, of course — there are idiots and scoundrels in every walk of life — but if all other things are equal, give me the pro from Dover over someone’s golf buddy every time.
Perhaps that’s why I sometimes lower my standards from the le Carre level to enjoy a Tom Clancy novel. Jack Ryan moves in a world peopled by competent, heroically dedicated public servants. Most wear uniforms — soldiers, sailors, Marines, cops — but others are costumed in the conservative suits of the FBI, CIA or Secret Service. The ones you have to watch out for are the politicians; they always have agendas that have little to do with protecting the country or the rule of law.

This has a ring of truth to me. I grew up in the Navy and have spent my adult life dealing with a broad variety of people from cops to lawyers to FBI agents to politicians to private business types. I know a lot of fine politicos and private-sector executives, but as a percentage, I’ll more quickly trust the honor of public-service professionals.
Of course, they often don’t trust me — at least not at first — and I don’t blame them. The press spends too much time with publicans and sinners, and absorbs too many of their values. As a group, for instance, we tend to love it when a special prosecutor is appointed. That means fireworks, and fireworks are news.
Call me a heretic, but I’ve always wondered why we don’t just let the professional investigators do their jobs. Do we really think the FBI — not the political appointees at the top, but the career agents who do the work — can’t investigate corruption? Sure, a politician can try to get such a civil servant fired or transferred to garbage detail, but such overt efforts to subvert the system tend to get noticed, a la Nixon’s “Saturday Night Massacre.”
Mr. Gates has had his own run-ins with politicians and special counsel. He withdrew from consideration to become Ronald Reagan’s CIA director in 1987 because he had been senior enough for the Iran-Contra affair to have cast its shadow over him. He was under formal investigation in that connection when he was nominated again under George H.W. Bush. No one ever pinned any wrongdoing on him, and he was confirmed by the Senate.
This time, the Democrats who are likely to line the gauntlet he must again run to confirmation

were generally supportive of his nomination. Of course, look at the act he’d be following. Mr. Gates is described as a soft-spoken, yet tough-minded, “pragmatist and realist,” an antithesis to the civilian ideologues who have been running the war.
In Thursday’s news reports, the Gates nomination was treated as another sign of “the ascendancy of the team that served the president’s father.” There’s truth — and reassurance, for pragmatists — in that. He has for the past several months served as one of the “Wise Men” reviewing and critiquing the conduct of the Iraq War, along with former Secretary of State James Baker. That makes him particularly, if not uniquely, well prepared to run the war more successfully.
Of course, he’s not a Defense professional. But the Pentagon might be an exception to my general preference. In that particular case, the real professionals — the uniformed leaders, the warriors —spend their careers trying to stay out of the Pentagon. I worry about the ones who do otherwise. Beyond that, it’s probably best that Defense not be headed by a general or admiral, to preserve the principle of civilian oversight. But it would be nice if they had a boss who would listen to them.
Given those conditions, who would be better than a pragmatic national security professional who possesses mastery of the entire spectrum of intelligence gathering and analysis, and has been studying in depth what has gone wrong in Iraq? He just needs to help the president pick a direction. The generals and admirals will know how to get the job done from that point.
They’re professionals, too. 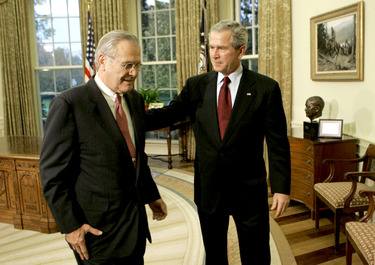