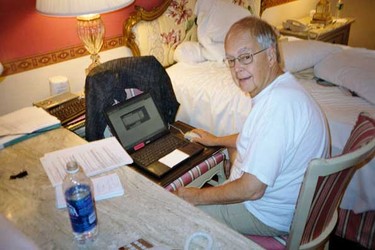 Lee Bandy at work in his hotel room at the 2004 Republican National Convention in New York.

Lee Bandy, the fairest of us all

By BRAD WARTHEN
Editorial Page Editor
LOOKING AROUND at a crowd of journalists, I gestured to Lee Bandy and said, “This is the fairest guy in the room.”
Like Snow White’s stepmother, scribes generally don’t like to hear that anyone is fairer than they. But no one disputed the point, as all present had gathered to bid a fond farewell to Bandy as he retired after 40 years of remarkable service to this newspaper and its readers.
I was Lee’s editor when I first came to this newspaper almost 20 years ago. I was young enough and arrogant enough not to be intimidated — as I should have been — at the thought of supervising a man who had been covering Washington since the Kennedy administration. That was OK with Lee; he tolerated me. He tolerated everybody, and enjoyed the company of the human race in general. He still does.
That’s not the only way in which he stood out from the rest of us scribblers. He was also completely fair and impartial. Sure, all of us are, yadda-yadda, but he really was, and many people found it disconcerting.
One of the first things I was told about Lee Bandy was that he was a Republican. It had to be true, because Democrats kept telling me so over and over.
As you can guess, I watched him closely as a result. In my nine years as an editor at two other newspapers I had known one other reporter who was a Republican — he made no bones about it, so I’m not casting aspersions — and he ended up leaving us to become press secretary to a newly elected GOP congressman. Next thing you know he was wearing fancy suits and suspenders; he’s now a lobbyist.
Not wanting to risk another such ugly episode, I was extra careful with Mr. Bandy’s copy. Strangely, though, I never found any evidence that he skewed Republican. He seemed to be scrupulously fair to all his subjects.
That, apparently, was what had aroused the suspicion of S.C. Democrats. They were still in the majority. Not long before, there hadn’t been anything in the state but Democrats, so anything having to do with these newfangled Republican critters seemed unnatural and made them wary. The fact that Lee Bandy was just as fair to Republicans as he was to normal people made them think he must be one of them.
But he wasn’t, believe me. I had edited other political writers over the years who were routinely fair to Republicans, and I had worked with that one actual Republican, so I knew the difference.
You can see why Democrats wondered, though. Republicans on the national and state levels actually trusted Lee Bandy, and this made him conspicuous. When Lee Atwater, Democrats’ ultimate bete noir (before W. and Rove), contracted cancer, he would only speak to one reporter in Washington or anywhere else — Bandy.
Years later, when former Gov. Carroll Campbell revealed that he had Alzheimer’s, Lee Bandy was the only one he wanted to tell the story. That would seem to indict him permanently as a Republican, or at best a friend of Republicans, if not for one thing:
By this time, the conventional “wisdom” had shifted. Now, it was common knowledge among Republicans everywhere that Lee Bandy  was a dyed-in-the-wool, unrepentant, proselytizing, big-government-loving, yellow-dog left-leaning liberal Democrat, and probably a socialist.
I have learned this unassailable truth from letters to the editor in recent years. If you’re a regular reader, you know exactly what I’m talking about. In fact, you were probably disoriented by the first part of this column, unless you’re an old-timer like Lee. Your younger, or more recently converted, Republicans would just as soon vote to restore welfare as we used to know it as believe that Lee Bandy could possibly be one of them.
What changed? Nothing. Lee’s great sin was that he was just as fair to the now-despised minority Democrats as he had been to Republicans back when they were little more than an oddity.
What hadn’t changed was that he was still the pre-eminent political writer of South Carolina’s largest newspaper — its capital city newspaper — which magnified his sin of being fair and magnanimous to those whom the partisan majority of the moment would prefer to see him despise.
Lee can’t help it. That’s just the way he is. He likes people, and he’s nice to them. Don’t ask me to explain how a guy like that kept a newspaper job for 40 years. It’s unnatural, but there it is.
We’ll miss you, Lee. 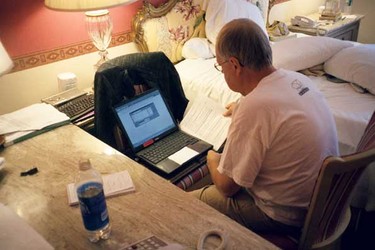 20 thoughts on “Column on Lee Bandy”