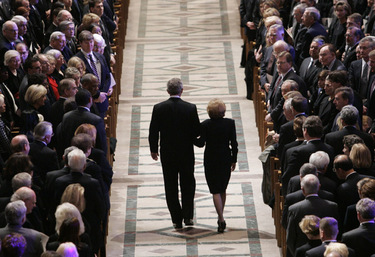 I first heard of Peggy Noonan as a speechwriter, credited with Bush the First’s "thousand points of light." Since that phrase didn’t seem particularly remarkable to me, I wasn’t particularly impressed, and didn’t think any more of her. 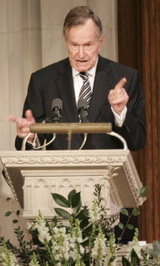 Then, sometime around 15 years
ago, give or take a couple, I was channel surfing and paused on a documentary, my eye caught by a fine-featured, red-headed woman who spoke with great dignity and intelligence. I don’t remember what she was saying; I was just struck by the overall gestalten impression. Cate Blanchett — whom we knew not at that time — sometimes tries to portray this combination of ageless beauty, intelligence and grace, and does pretty well. But this was someone who lives that way. Who is that? I thought. They showed her name. Oh. This time, I was impressed. She presented herself and her ideas better than the man for whom she had written.

Finally, I came to know her better through her columns on the OpinionJournal of the WSJ. Her latest is a good example of her work. It’s about the importance of ceremony to the life we live in common, about how we live together when we are at our best, our enmities set aside, when we actually become each other’s points of light, as it were.

Of course, I can’t help being struck by the amount of time she always seems to have on her hands. Imagine being able to sit and watch Gerald Ford’s funeral on the tube — the Times Square thing, or Nancy Pelosi’s swearing-in. Who’s got that kind of time? Obviously, she does. So do a lot of people she knows, since they’re writing to share their observations.

Actually, come to think of it, so do a lot of commenters on this blog (judging by appearances), since they seem to sit around reading blogs and watching the tube and getting whipped up over this or that partisan non-issue of the moment.

Peggy Noonan make far better use of that same time — and better than I would, too. If my life ever slowed down a bit. (To use something from the popular culture, picture me as one of those characters — Cary Grant, if you’re inclined to be generous, someone else if you’re not — in a fast-talking screwball comedy about newspaper life in Ben Hecht‘s day. I may rip the latest bulletin off the teletype machine as I pass by, long-ashed cigarette flipping up and down out of one side of my mouth as I yell at a copy boy out of the other, and see that Gerald Ford has indeed died — but sit still for his funeral? When?) If I had that time, I’d probably cram a DVD into the machine, anything to take my mind from work for a moment.

Because she watches, she’s able to see the truth and beauty, say, in the way Mrs. Pelosi assumed power — something of which the actual opinion page of the Journal itself is incapable. They were busy castigating her for taking a page from Tom Delay. It’s what you might call political opinion as usual. Ms. Noonan’s writing, at its best, has a graciousness that takes us beyond that.

It calms me down a bit, when I find time to look at it, and I am vicariously thoughtful, dignified and full of proper thoughts toward humanity. (I don’t necessarily mean I hold the same thoughts, but she transmits the same calm attitude.) It doesn’t last long, but while it lasts, it’s good. 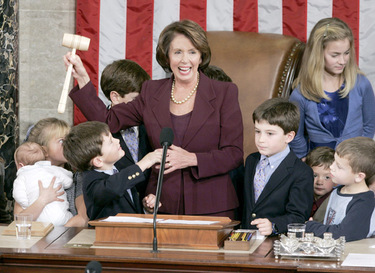