So you’re for ‘school choice.’
What do you mean by that?

By Brad Warthen
Editorial Page Editor
EVERYBODY likes “school choice,” it seems. S.C. Superintendent of Education Jim Rex is for it. Gov. Mark Sanford is for it.
Even my bishop, Robert Baker of the Diocese of Charleston, favors it, as he said in a letter
that 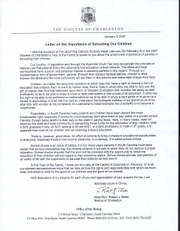 appeared in our bulletin at St. Peter’s Catholic Church 14 days ago.
But look just a bit closer at what “school choice” means to each of them, and you find profound differences.
Personally, I’m suspicious when any policy issue is summed up as a matter of “choice.” It often means that the people advocating the given position can’t sell it on its merits. They may be avoiding less palatable, but more descriptive, terms such as “abortion,” or “public subsidies for private schools.”
But not always.
Of course, the governor is pushing public subsidies for private schools.
Mr. Rex seems to be clothing his proposed liberalization of school attendance rules in the “choice” mantle, at least in part, in order to head off the folks on the governor’s side.
In last year’s election, he essentially said to the school privatization crowd: You want choice? I got your choice right here, in the public schools.
Then, he trotted out his proposals in a press conference the day before the usual crowd unveiled its usual private-school-subsidy plan last week.
Not that I don’t think Mr. Rex is sincere. He really does want to make it possible for parents to send their kids to the public schools of their choice. It’s an attractive idea.
But the idea has its limitations. Richland District 2 — which already has a generous intradistrict “choice” policy — can’t make enough room when every child in Fairfield County wants to come on down. How will the state pay to transport those children, when — as is too often the case — their families can’t afford a car?
The other side has the same problems. Even if we fantasize that an excellent, welcoming private school even exists in a poor, rural child’s county, and has space for him and his voucher — how’s he going to travel the 10 miles each day?
I know Mr. Rex has thought about those things, by contrast with the private-school choice advocates. We’ll see how well he addresses them.
The governor is sincere, too. He really does want to use tax money to pay people to desert public schools.
I know my bishop is sincere. He believes parents should determine what sort of education their children receive, and that it’s important to provide an option for them that teaches Christian values. I agree completely.
Where we differ is on whether it’s right to ask state taxpayers to subsidize Catholic education. I say no. We shouldn’t do that any more than we should ask the state to fund a new steeple for us.
The bishop’s letter pretty much freaked me out, because it used rhetoric of the more extreme advocates of privatization. Worse, it urged Catholics to attend a rally those folks are holding at the State House on Tuesday.
Since then, the bishop has assured me that he did not mean to back any movement that criticized or attacked public schools. And while he’s not withdrawing his support for the Catholic “choice,” you won’t see him at that rally.
“I apologize for the tone of my letter,” he said, referring to portions that repeated the “South Carolinians for Responsible Government” mantra that “most of our children are not receiving a sound education” from public schools. “I would reword it” if he had it to do over, he told me Friday. He “would like to be seen as a respectful partner in dialogue” with public educators.
He just wants people to be able to afford the Catholic option. The diocese closed a number of schools that served poor and minority communities back before he became bishop, and he’d like to reverse that trend.
He would only seek state subsidies “for the working poor and people who are economically at the poverty level.” That’s just what Mark Sanford said he wanted when he ran for governor in 2002. But when out-of-state libertarian extremists started funneling vast sums of money into the state, he embraced their far more radical agenda, which has its roots in the notion that “government schools” are essentially a bad idea.
My bishop doesn’t embrace that. Of course, I oppose even the more limited funding of Catholic schools with public money. If we Catholics want to provide education to the less fortunate — which we should do — we need to dig into our pockets and pay for that ministry ourselves.
Jesus didn’t fund his ministry with the money St. Matthew had squeezed from the public as a tax collector. He didn’t take from the world; he gave. He told us to do likewise. We Catholics are far too stingy when the collection basket comes around, and that should change. We shouldn’t force Baptists, Jews, agnostics or anyone else to make up for our failing.
Uh-oh; I’m preaching again.
Another eminent Charlestonian told me he was concerned about the bishop’s letter, and kept meaning to say something to him, but hesitated because of his reluctance as a lifelong Catholic to tell his bishop what he ought to do.
As a convert baptized at Thomas Memorial Baptist Church in Bennettsville, I was not so inhibited. I sort of went all Martin Luther on the bishop. That’s OK, he said: “You’re free to say you disagree.” Which I do. But not entirely. I’m glad we spoke.
Bottom line: When somebody says they’re for “school choice,” ask for details. The differences are huge, and of critical importance to what kind of state we’re all going to live in.

For the bishop’s letter, my letter to him, and more, go to  http://blogs.thestate.com/bradwarthensblog/.