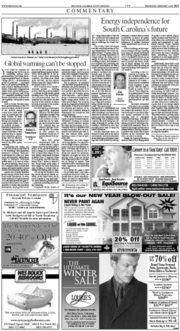 was out yesterday, so I picked the content and put that page together myself. Therefore it reflects my obsessions.) It also provides an opportunity to say again what our platform is, and what is isn’t.

Someone who doesn’t think long enough about it might say the two pieces are at odds. Jim Ritchie sets forth his excellent set of initiatives for our state to do its part in promoting energy-efficient buildings, hybrid cars, and such, and Robert Samuelson says beware of politicians announcing grand plans to save the Earth from global warming.

But they actually support each other, and together sort of explain why I take the approach I do in proposing this party.

True, proposals such as "cap and trade" that politicians are likely to get behind (because they see the parade marching that way) will not stop or reverse global warming. Even if you do all the "politically unrealistic" things I propose, the trend will likely merely slow down, and surely not reverse in our lifetimes. Of course, that’s all the reason to do everything we can (and NOT just what we want to do, or think we can afford) to put the brakes on the trend. Otherwise, things get worse, and at a faster rate.

But as Sen. Ritchie makes clear, what we CAN do is grab hold of our energy destiny. What he proposes won’t completely solve the problem, but it’s a damned good start from the perspective of what state government can do. And the broad coalition he’s got behind it is extremely encouraging — not only in terms of Energy issues, but others where we’ve been stymied by partisanship and ideology.

Pragmatism is on the march. Let’s all join. Except, let’s get at the head of the parade and start a new, double-time pace. Otherwise, the battle will be over before this rapidly coalescing army gets to the field — and we all will have lost.

8 thoughts on “Doing what we CAN do…”