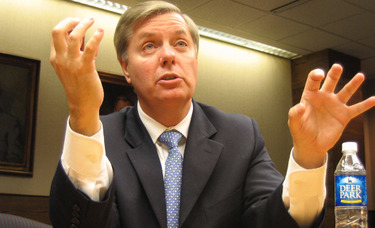 “Today we are witnessing an almost uncontained hyper use of force in international relations — military force…. Primarily the United States has overstepped its national borders, and in every area…. They bring us to the abyss ….”
— Vladimir Putin

By Brad Warthen
Editorial Page Editor
VLADIMIR PUTIN is pushing Lindsey Graham toward the Energy Party, and I feel fine.
Sure, that anti-American diatribe at the Munich security conference on Feb. 10 was the biggest step back toward Cold War since Nikita K. took off his shoe, but I like to look at the bright side.

“The biggest threat to everybody in the room wasn’t al-Qaida, or Chechen rebels, it was the United States,” our senior senator said in an interview last week, marveling at the neo-Stalinist’s international demagoguery. “It was a blatant pitch at trying to divide Europe and the United States, because he sees us as weak.”
“Which takes us to energy independence,” I said.
“Which takes us to energy independence,” he nodded.
I like the way this guy thinks.
As regular readers know, I recently called for the creation of a new political party, one that would get serious about our greatest strategic vulnerability, while saving the world from global warming at the same time.
Sen. Graham’s still a Republican, but we might have to nominate him anyway.
He had thought plenty about this stuff before Munich, but that one intemperate speech (followed immediately by an Iranian dissertation on democracy that seemed to come from some other planet) jacked up his resolve. “Whatever doubts I had about us being energy-independent were put away,” he said. “I don’t think he ever made that speech unless he sensed weakness.”
So how do we get strong?
He says the United States government must use economic incentives to encourage hybrid technology, biofuels, hydrogen, nuclear power — pretty much any viable alternatives that we can embrace that neither strengthen the worst bad guys in the world nor pump out more greenhouse-promoting carbon dioxide.
He would promote the transition to hybrid cars — and eventually hydrogen — on three levels:

He makes sure to point out that South Carolina can play a pivotal role in all this. We’re well positioned to help develop the technologies for a hydrogen economy. Meanwhile, we can grow and process switchgrass and other plants for biofuels.
He sees “a whole economy in energy-efficiency,” one that South Carolina could help lead.
Beyond that home-team advantage is the bigger picture: “It is in our long-term national security interest to get people thinking about alternatives.”
It’s not just cars. We need to make more efficient, cleaner refrigerators, computers and every other item that uses electricity.
As for that, “Most of our power comes from coal-fired plants.” We need to “give nuclear power the same tax advantage we give solar and wind.” Like those usual green suspects, nukes don’t emit CO2, either.
Expensive, yes, but he’s convinced that the economic cost of global warming is far greater than the 1 percent of gross domestic product that a full transition away from emitters would cost.
So how do we pay for it?
Well, he said, we can’t do it by “cutting waste” in the discretionary budget — what most people think of when they say “federal spending.” There’s just not enough there.
You have to go where the  real money is: entitlements. “Change the structure of our debt,” he said. “Give people like me and Joe Lieberman and others some breathing room on Social Security,” room to do the kinds of politically unpalatable things that are necessary to save it without pulling us further into the fiscal black hole.
Can we produce our way out? No. “Yes, there’s gas and oil, but it’s a drop in the bucket,” he said, no matter how deep you drill in the ANWR or offshore. “They’re sort of just one more drink” for the hopeless alcoholic.
What about increasing the gas tax, to promote conservation and raise money for incentives? No. “Gas taxes will put some businesses at a competitive disadvantage with China and India.” Besides, “it’s not progressive.” It hurts the poor.
“The next president of the United States should declare a war of energy independence,” he said, evoking the usual metaphors such as the Manhattan and Apollo projects. We had such a war once against a king. Now we should “declare a war of independence from the dictators and sheiks.”
The next president? So he’s given up on this one? He didn’t say that, but I will. He said President Bush has addressed the issue, but only in a “piecemeal” fashion.
As for Lindsey Graham, he says he’s doing what he can, such as working “with McCain and Lieberman to strengthen the conservation part of their global warming bill.”
But ultimately, he’s just one of 100. “The real megaphone is for the person who’s going to be president.” Does that mean John McCain, his preferred candidate for the GOP nomination? Yes, partly: “He’s led on global warming like no other Republican.” But “I’m urging all the candidates.”
OK, so I didn’t start this discussion. Mr. Putin did. But that doesn’t mean the Energy Party’s not going to grab the opportunity thus created to strengthen national security and save the Earth.
Neither should you. So go ahead. Jump right in. 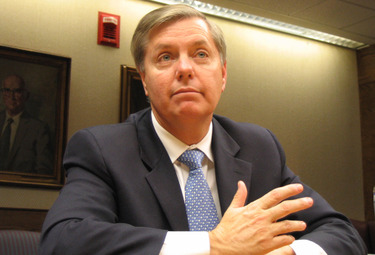