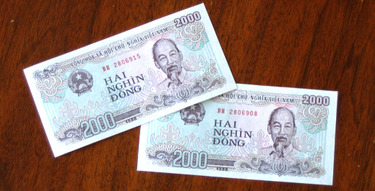 My conscience dictates that I disclose that U.S. Rep. Joe Wilson gave me some money today — to be specific, 4,000 Dong in crisp, new 2,000-Dong notes.

Now, we’ll all pause for a moment while Beavis and Butthead exhaust the adolescent possibilities of that term. All done, fellas? We’ll move on.

Anyway, I ran into Joe downtown this morning with his sidekick Butch Wallace, and the congressman was handing out these souvenirs from his recent trip to Vietnam. He gave me one for me, and one for my Dad, who he knows is a Navy veteran. In his own distinctive rapid, enthusiastic, delivery, he also told me the following as we rode down an elevator together: