Neither Mike Fitts nor I have cable TV — at least, not the kind that gives you those 24-hour news channels — so both of us were looking for a place to watch the GOP candidates’ debate tonight. We started calling around to the various campaigns with the intention of each of us going to one of the candidates’ supporters’ TV-watching parties.

I knew of three — McCain, Giuliani and Huckabee. I suspected my contact info on the S.C. staffs for those campaigns needed updating, so I checked around for fresh numbers on Adam Temple with McCain, and Elliott Bundy with Giuliani.

I had a cell number for the last guy to contact me with regard to Huckabee, but somebody gave me a new one. I tried it, and got voicemail. I asked whether this was the right number, sought a current e-mail address, and said I wanted to make sure he was still with Huckabee. Then, on a whim, I tried the old number.

He answered right away. I apparently caught him in the middle of some kind of transaction — it sounded like a checkout, or drivethru, or something. So he was trying to deal with somebody else while I first asked the stupid question, "Is this a good number to call?," immediately thinking "Doh!"

Then I asked the really stupid question, the prizewinner: Are you still with Huckabee?

"NO," he said, completely turning his attention to me. "I’m the executive director of the Republican Party!"

"MAN!" said Hogan Gidley. I could see him shaking his head through the phone connection.

Well, you see, I was running down a list, and not really stopping to think WHOM I was talking to…

"Again, MAN!" He had obviously never heard anything so stupid, so utterly clueless in his life. Neither had I, so what was I going to say?

Here’s the worst bit: I left him a message saying the same thing on that other line. He’ll be sharing that with Katon Dawson and other folk who think I’m a big fat idiot anyway. So here’s their confirmation.

If it makes him feel any better, I can’t think — without looking it up — who his counterpart over with the Democrats is right now. I think I know, but it’s not coming to mind. I know their new chair is Carol Khare. Or Fowler, now. (Although on the Web site it’s still Joe Erwin.) But the executive director — no.

(Footnote: That’s Hogan "Chuckles" Gidley in the photo above right. It’s a slightly-enhanced detail from the below photo from our primary interview with Karen Floyd. Almost every time I talked to Mrs. Floyd last year, Hogan was lurking in the background, with an expression almost exactly like that one.) 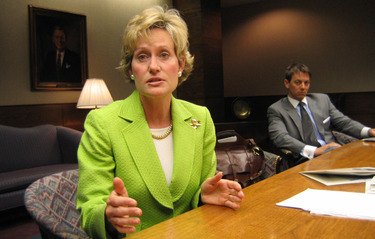