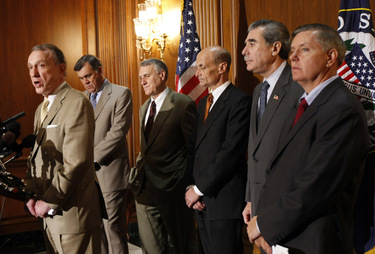 By BRAD WARTHEN
Editorial Page Editor
LINDSEY Graham is a stand-up guy.
I just thought somebody should say that before sensible, thoughtful folk completely forget about all the hollering we’ve recently heard about his advocacy of the defunct immigration bill.
The ones doing the hollering won’t forget, or so they say. Remember the Angry White Male, who rose up and swept Newt Gingrich and his cohorts into power in Congress in 1994? Well, that guy is alive and well, and he’s really, really ticked off at Lindsey Graham. And John McCain.
Ronald Reagan’s 11th Commandment is being broken all over the place, right over Sen. Graham’s skull. Some sample comments from my blog:

And so forth.
Speaking of the blog — I set them off again when I posted a link to an article in National Review that said, “I hope the American people, at least, step back from the obsessive play-by-play pre-season election analysis and reflect on Senator McCain’s actions for what I believe they were: One of the purest examples of political courage seen in Washington in a very, very long time…” 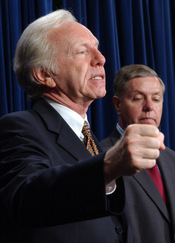 That was written by Sen. Tom Coburn, who opposed Sens. McCain and Graham on the immigration bill, but had the intellectual honesty to admire the extremely rare fortitude they exhibited in their stance.
But aside from Sen. Jim DeMint going out of his way to be gracious and magnanimous after crushing this initiative by the colleague who usually overshadows him, there is little appreciation for the quality that Sen. Coburn admired. “Lindsey Grahamnesty was not elected to be courageous,” said one of my bloggers. “He was elected to vote on behalf of the people of South Carolina. If he can’t do that, maybe he should go be courageous somewhere else.”
But courage is too rare and precious a commodity in our politics for anyone to dismiss it. How long has it been since you saw somebody from South Carolina take a tough, leading position on a major national issue, without regard to the consequences?
Lindsey Graham is a smart guy, about as smart as they come. Whatever the issue, it is a delight to hear him expound upon it. Does anyone really think he didn’t realize in advance how constituents would react? Even if he didn’t realize the magnitude of this tidal wave of opposition, once it broke over him, did he back off? No.
That’s doing what you believe is right in spite of the cost. Sens. Graham and McCain have repeatedly demonstrated remarkable political courage, on this and other issues — standing up to the Bush administration on torture, reaching out to Democratic moderates to smooth the path for the president’s judicial nominees. Time and time again, they have done what they believed to be right, and explained their actions with intelligence and conviction.
Those of you who are so livid right now can dismiss that all you want, but you are wrong to do so. You’re also being rather foolish. The “Gang of 14” deal is what led to John Roberts and Samuel Alito joining the Supreme Court. And dream all you want, you just rejected the one best chance you had of seeing any substantive action on illegal immigration.
I was dismayed to see the two senators step out on immigration in this way at this time.
After all, the only people who considered illegal immigration to be a front-burner issue were the sort of angry fantasists who believe it’s possible to round up 12 million people who don’t want to be found, and deport them.
I asked John McCain about it: Why this? Why now? He thought it was important to national security. He said “we can’t have 12 million people in the United States of America who we don’t know who they are or where they are and what they’re doing.”
Sen. Graham agreed. And nothing was going to stop them; they were determined “to stand on principle, and try to solve problems,” as the South Carolinian puts it at such times.
I was reminded of how rare principled courage was on this issue (and others) when I called around to local Republicans for comment. I got some good ones — not for attribution.
“There’s no shortage of plain old racism” in this issue, said one of these brave souls. “God forbid you should say it out loud, though. Lindsey said it out loud.”
“Courageous? I think it was stupid,” said another. “I think it was the most stupid thing I’ve ever heard of.”
At the same time, that second tower of strength predicted that the people who keep promising they’ll “never vote for Lindsey Graham again” will do just that, because “nobody worth anything will run against him.”
Possibly. But the 2008 Senate election may answer once and for all whether, in this finger-in-the-wind putative republic of ours, political courage is the one unforgivable sin.