By BRAD WARTHEN
EDITORIAL PAGE EDITOR
HOW’RE YOU gonna keep ’em down on the blog after they’ve heard Obama?
For an old guy, I have a lot of ways of keeping in touch with the young, idealistic and enthusiastic — my kids, my kids’ friends, my friends’ kids… and Weblogs.
But these kids today — they need to learn to stick to something. Law student Laurin Manning was really cooking with her LaurinLine, one of the foremost political blogs in the state. Then she quit to 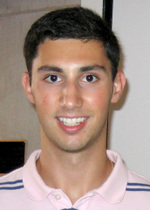 politick for real, rather than just writing about it.
Then there’s Max Blachman [at right],
son of my friend Moss, who started “Democrats in the South” just over a year ago and was cooking along fairly well for a while. He last posted on March 3.
Both Laurin and Max have gone to work for Barack Obama.
And they are far from alone. Thursday, I met Elizabeth Wilkins [below left], originally from New York, who’s down here as youth vote director for the Obama
campaign. What pulls Elizabeth so far away from home? “It’s not
every 23-year-old who gets to work on a campaign 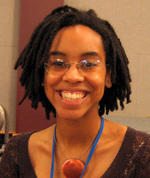 for a man who might be the first black president.” True, but there’s more than that.
Poor John McCain is laying off members of the Pepsi Generation left and right, but his Senate colleague from Chicago seems to have an employment agency going for the kids. (Not that they’re all paid. Most aren’t.)
Yes, campaigns in general tend to be youth-heavy. The rest of us have family responsibilities; we seek job security more lasting than the next news cycle.
But there’s something about Obama that makes the youthfulness of his supporters seem more apt, something that reminds me of my own youth — and not just because the first time I saw him in person was when he spoke to the College Democrats of America over at the Russell House on Thursday. It was there that I heard him, among other things, reassert (to applause) that he would rush right out and have meaningful talks with the thugs who run Iran, Syria, Venezuela, Cuba, North Korea and, by logical extension, pretty much any other regime that would be tickled magenta to be handed such a great propaganda photo-op.
It’s easy for a graybeard like me, or that crusty old neocon Charles Krauthammer, or Hillary Clinton for that matter, to dismiss such promises as “irresponsible and frankly naive” — as did Sen. Clinton to anyone who would listen last week after her chief rival gave her that opportunity to sound mature, tough and sane.
But beyond the fact that young people think mean people suck, and it’s mean not to talk to people, and that we should have done more of that before going all Angry Daddy on Saddam, there’s a positive reason why Obama has a particular appeal to the young: He describes public service as something you can engage in and still feel clean.
Poor Joe Biden, who’s even older than I am, got into all sorts of trouble for calling Obama “clean,” but that’s just what he is. And for those who are focusing on details of the latest 24/7 news cycle’s scandal or whatever, it’s easy to forget how appealing “clean” can be to the fresh-faced.
It can be a compelling issue, and it belongs completely to Obama. Bill Clinton’s wife, late of the Rose Law Firm, can’t touch it. Nor can the $400 haircut who wants to be the nation’s trial lawyer. And those old guys over on the GOP side — forget it.
The 23-year-old who still gasps somewhere within me is convinced that Barack Obama is completely for real when he channels JFK via Jimmy Carter. Remember Jimmy Carter — not the old guy with the hammer who shakes his finger at us like Miz Lillian when we fail to be sweet to other nations, not the Grand Incompetent of Reagan Revolution lore, but the original, the one whose green bumper sticker I had on my orange 1972 Vega back when even I was 23?
He was never going to lie to us. He would lead us from the partisan, crooked, nasty cesspool of Watergate and the angst of Vietnam. He would help us to be the kind of country that JFK had promised we would get to be, back before Everything Went Wrong.
Well, I do. And it wasn’t about Democrat or Republican or liberal or conservative or black or white or money or any of that stuff embraced by the people who had messed things up. It was about Clean. It was about Meaning.
I first spoke to Barack Obama — very briefly, because of cell phone problems while I was traveling through mountains — a month ago. He only wanted to talk about one thing: Clean. He was unveiling his plan for “the most sweeping ethics reform in history,” — “Closing the Revolving Door,” “Increasing Public Access to Information,” and other Clean Government 101 stuff.
But with that overflow crowd of college kids providing better reception than my Treo, I realized that for this candidate, such yadda-yadda basics were more than just the talking points of that one day.
“Here’s the point,” he told them. “I wanted you to know that I’ve been where you are. I loved the world as a young man, and I wanted to make a difference. I’ve often been told that change wasn’t possible, but I’ve learned that it was. I believe that it still is. And I’m ready to join you in changing the course …”
Not just the course of war, or the wicked oil companies, or me-first politics, or meanness, but changing the lousy way that things are, period.
He invoked “an image of young people, back in the civil rights movement, straight-backed, clear-eyed, marching for justice…” and told them they could be those young people. They were those young people.
He reaches across time, across cynicism, across the sordidness of Politics As Practiced, offering to pull them in to the place where they can make a difference.
You can see how, to someone who’s 23, he’d be worth ditching the blog for.

20 thoughts on “Obama, the young, and the magic of Making a Difference”