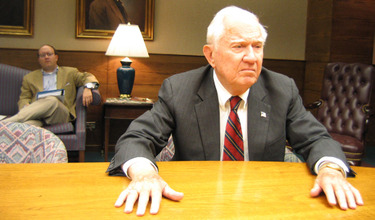 Tammy Stokes over at "Seeding Spartanburg" has filed a post* that among other things, states the following:

Thomas Ravenel won that position for one reason and one reason only.
He had an R behind his name. It wasn’t his experience or his track
record of being a fine, upstanding South Carolinian who could bring
vast knowledge and positive change to the Treasurer’s office.

It was because he ran as a Republican. And with the support of
the SC GOP, they proceeded to drag his opponent Grady Patterson’s name
through the mud in a desperate attempt to unseat one of the only
remaining elected Democrats in our state. Some of the dirty insults —
especially the personal attacks on Patterson’s age — were embarrassing,
hurtful tactics especially when the person who unseated Patterson is
now facing federal drug charges less than 7 months later. Looks like
someone with maturity and experience would have been a better choice
after all.

Personally, I find Tammy’s remarks embarrassing and hurtful. Not really, but she does cause me to revisit an idea that others have brought up in the past, and which I’ve almost entirely dismissed with a clear conscience:

Was I mean to Grady Patterson when I posted this video, and this one? Some folks think so. I know for sure that Trav Robertson, who was the ex-treasurer’s closest political assistant (mentioned in this post, and pictured in the background above), thinks so. Each time I run into him these days, he tells me what an awful person I am, specifically because of the videos. I’d like to know what y’all think.

Back before the Ravenel blowup and the Nazis praising the Confederate flag, the "He makes up stuff" clip was either my first or second most-viewed on YouTube.

That’s no moral or ethical defense, of course, but it verified an assumption I had when I put the footage up: Voters would be interested.

I further believed that their interest would be legitimate. I felt that as long as I had the video, and a means of sharing it, I should. There are certain subjective cues you pick up on in a face-to-face interview that play an inevitable part in your judgment of a candidate, but which are hard to get across to readers in a way that they both pick up on and find credible. Sometimes, the ways in which we set out our reasoning in endorsements are theoretically sound, but fail to get across that indefinable something — just how weird this candidate was, or how dumb that one seemed.

In Grady Patterson’s case, there was something about the impression he gave that caused me to think, "Here’s a good man who has given his life to public service, but it is well past time for him to retire and let others do the work." It would have been far better to see him off with a warm retirement party, with lots of grateful speeches for his contributions, than to turn him out of office so ignominiously, losing to that obnoxiously cocky young Thomas R.

Well, I did say some stuff sort of like that. But it seemed far more useful to the voters if I would just show them. (Otherwise, they might assume I was just looking at a calendar, and inferring that he should retire.) The video clips enabled me to do that.

So what do you think? Did I do right? I think I did.