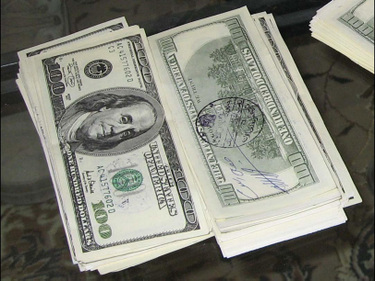 Just received the latest dispatch from our man on the Kandahar front. Here’s the PDF file of the full report. Here are some excerpts:

Southern Afghanistan 16 AUG 2007
Dear Family and Friends:
Well, three months, 25% of the deployment has passed and Team Swamp Fox is doing very well and making measurable progress mentoring the Afghan National Police (ANP). Since we began combat operations in our AO we have only had one day off. There is a great deal of work to be done and much terrain to be covered. There has been so much that has happened since my last update I am finding it very difficult to begin.

What follows is a series of pictures from numerous missions over the past several weeks which illustrate the challenges the Government of Afghanistan (GoA) faces in eliminating Taliban and Al Qaeda without and the corruption within. I am encouraged each day by my fellow Swamp Fox teammates as well as my ANP counterparts. As you know from my previous emails the ANP is struggling to clean its house of those that would rape, steal and murder the population they are charged with protecting. One of the most encouraging signs developing here is the team of ANP “Regulators” that Team Swamp Fox is mentoring. This is only one of our many responsibilities working with the ANP.

The Regulators are established to receive additional specialized training to exemplify the high standards that should be present in the ANP and be the enforcement of those standards on other ANP throughout the Province at the direction of the Provincial Police Chief. We know that we, the US or ISAF, cannot bring about the necessary and sustainable change ourselves. It must come within the ANP itself. To see ANP officers correcting others and being proud of the uniform they wear and proud of their service to their country gives us all encouragement. Just as impressive to us has been the devotion that has developed in the Regulators for the members of Team Swamp Fox and us for them. When the Regulators finish their training, they will then train others and those will train others and those others and so on.

As you can see from these photos we have demanded a great deal from them and they have met the challenge with each mission and with each training day and as a result security is improving….

Burn baby burn… Millions worth of raw opium goes up in smoke. It took more than a day for it to completely burn. Had these drugs not been destroyed, they would most likely have been processed for sale in the UK and US and the proceeds of which would be used to support TB and Al Qaeda.

Stacks of counterfeit US $100 Dollar bills created in another nearby country unfriendly to US interests to be exchanged into Afghan currency and used to support the TB and Al Qaeda operations in Afghanistan….

Having ANP ANA and American and Romanian Soldiers descend upon your home early in the morning can be an unnerving experience no matter your age. With every action we take we accompany an Information Operation (I/O) campaign so that we communicate the “who,” “what” and “why” we are present. By performing the cordon and search with the I/O campaign we connect with the locals and communicate the importance of their help and we send a clear message to the enemy…

The Face of the Enemy… – One of the suspected Taliban fighters charged with
possession of illegal weapons,  ammunition, rocket and bomb making material in his  compound….

One of the best parts of the job is the kids. The first thing is they remind me of my own children at home and how proud I am of them. When seeing and 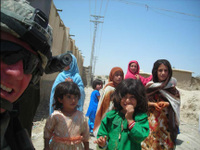 speaking with the children and knowing the environment they are growing up in
how could you want anything else that for them than to have a secure and peaceful place in which to grow and learn. The girl’s school, which of course did not exists when the Taliban were in charge, is doing a fantastic job and the courses in both the boys and girls schools look very familiar and remind me of the challenges I had with such subjects as chemistry, algebra, physics and
geometry. They are also being taught English and they are all too proud to share
their knowledge as they point and say “bird” or “boy.”…

We all are privileged to serve our Country in this way. As do all who are deployed away from home, we miss our families and friends and we hope with each days work that it in some way merits the loss of our time with our families … that our work is making a difference. Even more so for those who have given all their tomorrows for this cause, we commit ourselves every morning to making sure that we leave this place better than we found it so that this place, Afghanistan, will never again be a place that exports the terrorism we saw visited upon our Nation on September 11, 2001. We have not forgotten why we are
here.

He is my refuge and my fortress; My God, in Him I will trust. Psalm 91
Cheers, J 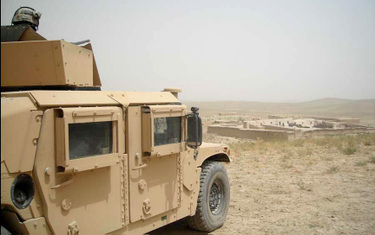