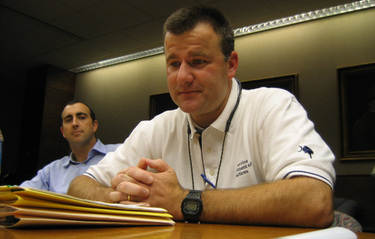 S.C. Corrections chief Jon Ozmint came by Tuesday to give his perspective on the recently redirected Senate investigation of his department.

He kept saying he wanted us to take the 30,000-foot view of the situation. Well, this brief post is more like the satellite view — a few sketchy notes, a video clip, and some supplementary material his office e-mailed over when we were done. Look at it and decide what you think; I haven’t had time to digest it or dig deeper, so I have no opinion to offer at this time — beyond our usual position, which is that we’ve got to stop trying to lock up everybody and his brother and not pay what it takes to have safe prisons (that’s the view from the moon, metaphorically speaking).

In a nutshell, he said there were three problems with the way the Senate committee has gone about looking at how our prisons are run:

"And I think those were the three problems that made this the disaster that it was," he said. We went on with a rambling discussion of problems at Corrections, politics at the State House, and various other matters, on and off the record — but the points above are what he mainly came to say. I urge you to watch him saying it on the video, as it helps you appreciate the passion and volatility that Mr. Ozmint brings to his job — whatever you may make of those qualities.

Oh, let me add this. Mr. Ozmint realized I was shooting video during the meeting. But near the end of the meeting, he said he didn’t realize I would publish it on my blog — even though he reads the blog (but, he said, his computer won’t play the videos). I asked him why he thought I was shooting it, and he said he supposed it was to back up my notes. But I have an audio recorder for that. He protested that he wasn’t dressed right. I told him he looked like a hard-working sort with his polo shirt with the name of the department on it. Whatever.

That’s all for now.

10 thoughts on “Ozmint: “I need the Legislature’s help on this; somebody’s going to get killed” at Corrections”