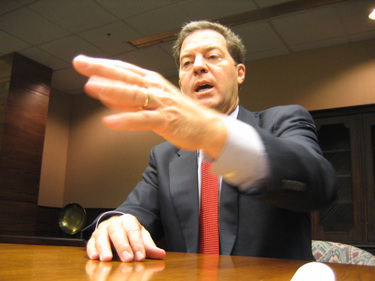 By BRAD WARTHEN
EDITORIAL PAGE EDITOR
TO SAM BROWNBACK of Kansas, a “kinder, gentler” America is more than just a line from a speech by Peggy Noonan. It’s about who he is, what he believes. It’s about the kind of America he would like to lead.
The bumper-sticker take on Mr. Brownback is that he’s the Christian Conservative in the GOP presidential field — or one of them, anyway. But in his case, we’re talking actual Christianity, as in the Beatitudes.
Or maybe we’re talking Micah 6:8 — as president, he says he would act justly, love mercy and walk humbly.
That’s what drew Columbia businessman Hal Stevenson, a board member and former chairman of the Palmetto Family Council, to the Brownback camp. He was disillusioned by “some of the so-called ‘Christian Right… I was looking for someone who exhibits, and walks the walk that they talk, and that’s a rare thing in politics.”
When Sen. Brownback met with our editorial board Wednesday, I was impressed as well. I was struck by how interesting things can be when you get off the path beaten by national TV news and the covers of slick magazines. You find a guy who brings “Christian” and “conservative” together in ways that belie our common political vocabulary.
Sure, he’s adamantly pro-life. But for him, that means being “whole life” as well — “Life’s sacred in the womb, but I think it’s also sacred in Darfur.” He’s just as concerned about genocide or starvation or slave traffic in Africa or North Korea as about abortion clinics in Peoria. Did he get there, as a Catholic convert, via the late Cardinal Joseph Bernardin’s “consistent ethic of life?” No — he explains that initially, he was more influenced by “the great theologian Bono.”
This sort of atypical association plays out again and again. His plan for Iraq is the same as Joe Biden’s, quite literally. (You know Joe Biden — the Democrat who has campaigned in South Carolina the longest and hardest, the one who’s arguably the best-qualified candidate in that field, but you don’t hear about him much on TV? Yeah, that Joe Biden….) Their bill would partition the country more along the lines of the old Ottoman Empire.
I have some doubts about that plan, but let’s suppose it worked, and we achieved some sort of stasis in Iraq. What about the next crisis, and the next one after that? What about Sudan, Iran, North Korea? What is America’s proper stance toward the world?
“I think we’ve got to walk around the world wiser and more humble,” he said. It’s an answer you might expect from Jimmy Carter, or a flower-bedecked pacifist at an antiwar vigil. Sure, the true conservative position, from Pat Buchanan to George Will, has been one of aversion to international hubris. But Sam Brownback carries it off without a tinge of either fascism or pomposity, and that sets him apart.
“Africa’s moving. Latin America is moving,” he said. “That’s where I’m talking about walking wiser and humbler. The first step in Latin America is going to be to go there and just listen.” Why is it, we should ask ourselves, “that a Chavez can come forward with his old, bad ideas, and win elections?”
“People in Latin America are saying, my quality of life has not improved.” And as a result, they’re willing to go with a dictator. “I think we need to go there and say, what is it we can do to help these economies grow…. It’s our big problem with Mexico and immigration.”
Back to Africa: “This is a place where America’s goodness can really make a big difference to a lot of people in the world, and it would be in our long-term vital and strategic interest.”
Asked about domestic issues, he cites “rebuilding the family” as his top concern. That may sound like standard, right-off-the-shelf Christian Right talk. But he comes to it more via Daniel Patrick Moynihan than James Dobson. He said he’s had it with beating his head against the brick hearts of Hollywood producers, and draws an analogy to smoking: Sure, people knew there was a connection between cigarettes and their nagging coughs, but Big Tobacco had room to dissemble until a direct, scientific line was drawn between their product and lung cancer.
Just as the government now puts out unemployment statistics, he would have it gather and release data on out-of-wedlock childbirth, marriages ending in divorce, and the empirically demonstrable connections between ubiquitous pornography and a variety of social pathologies. He’d put the data out there, and let society decide from there how to react. But first, you need the data.
His second domestic issue is energy (push electric cars) and his third is health care (he would “end deaths to cancer in 10 years”). He’s a conservative, but by no means one who wants government to butt out of our lives.
“Humility, as a nation or as individuals, is an effective thing,” Mr. Stevenson said in explaining his support for Sen. Brownback. “It’s the right thing, and it’s also a Christian principle.”
But that doesn’t mean you don’t take action. The Kansan summed up his attitude on many issues, foreign and domestic, in describing his reaction to Darfur: “Well you look at that, and you know that’s something that ought to be addressed… I mean, you’re the most powerful nation in the world… you can’t learn about these things and then say, well, I guess I’m just not going to do anything about it.”
Well, some could. But it reflects to Sam Brownback’s credit that he says he could not. 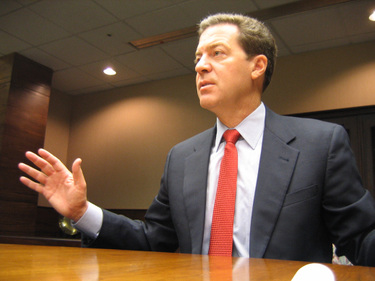 5 thoughts on “Sam Brownback of Kansas: The Beatific Conservative”