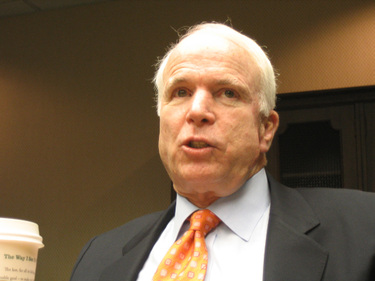 By BRAD WARTHEN
EDITORIAL PAGE EDITOR
HOW ARE YOU supposed to do your job with professional detachment when every time you see one of the main guys running for president, every time you read about him, every time he opens his mouth or takes an action in public, you think, “Hero”?
How are you supposed to keep your rep when you keep thinking, I admire this guy? Of all things, admire! It’s embarrassing.
On top of that, how do you do it when so many of the smart, hip, unfettered, scalpel-minded professionals around you snort when the hero’s name is mentioned, and use terms like “has-been” and “loser” and “that poor old guy”?
It’s not easy. Maybe it’s not even possible. It wasn’t possible on Monday, when John McCain visited our editorial board.
I presided as usual, asking most of the questions and so forth. But I never quite hit my stride. I was uneasy; I stumbled in bringing forth the simplest questions. It was weird. I’d pitched to this guy a number of times before with no trouble, even in post-season play. And here he was stepping up to bat in my ball park, where the rubber on the mound has molded itself to my cleats, and I can’t put a simple fastball over the plate, much less a curve.
I kept remembering our last formal meeting with him, in 2000, on the day that we would decide whom 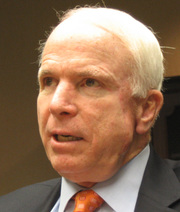 to endorse in a GOP primary that would either slingshot him onward toward victory, or enable George W. Bush to stop his insurgency cold. I wasn’t out of sorts like this. I had stated my case — my strong belief that we should endorse Sen. McCain — several days before in a 4,000-word memo to my then-publisher, a committed Bush man. I was fully prepared to make it again to the full board once the candidate left the room. And I was ready to lose like a pro if it came to that. Which it did.
But now, 9/11 has happened. The nation is at war, and bitterly divided, even over whether we’re “at war.” And I keep thinking — as I sit a couple of feet from the candidate, aiming my digital camera with my left hand, scribbling the occasional haphazard note with my right, glancing from time to time at the audio recorder on the table to note how many minutes into the interview he said such-and-such, so busy recording the event that I don’t really have time to be there — this is the guy who should have been president for the past seven years.
The odd thing is, a lot of people who now dismiss the McCain candidacy also believe he should have been president — that we’d be less divided at home, more admired abroad, more successful at war. But they talk like the poor old guy missed his chance. It’s like candidates have “sell by” dates stamped on them like bacon, and his was several years back. Too bad for him, they say. But I think, too bad for the nation — if they’re right.
The best thing for me, as a professional critic, as a jaded observer, would be for those people to be right. I have no trouble assessing the relative merits of the other candidates in either major party. I even like some of them. Life could be good, professionally speaking, if that old “hero” guy really did just fade away.
But he doesn’t. There he is, sitting there, being all honest and straightforward and fair-minded and brave and admirable. Dang.
Go ahead, get mad at him. He’s let the moment get away from him. You can’t take a man seriously as a leader when he’s blown all that money only to lose ground, when he can’t stop his hired rats from diving overboard. Focus on his mottled scars. Murmur about how even the best of men slow down with age.
But then you think about how this guy aged early. You look at his awkwardness as he holds his coffee cup, and you think about how the North Vietnamese strung him up by his broken arms, and all he had to do to end it was agree to go home. But he wouldn’t.
That was then, of course, but it’s just as bad now. Think about how you asked him several months ago why he thought he had to do something about immigration now, when the only people who cared passionately about the issue and would vote on the basis of that one thing were the ones who would hate him forever for being sensible about it. He had no excuse; he just thought it was the right thing to do. 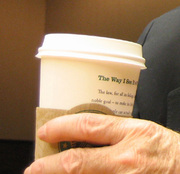 You think of all the Democrats and “moderates” who egged him on when he was Bush’s No. 1 critic (which he still is, if you actually listen), but who now dismiss him as the president’s “lapdog” because he (gasp!) — supports the surge and actually, if you can stand it, thinks it’s working! These political goldfish forget that their favorite maverick criticized Bush for not sending enough troops, so of course he supports a “surge” when the president knuckles under and implements one.
Oh, but don’t speak of such people dismissively. This ridiculously admirable guy at the end of the table, who long ago forgave both his communist torturers and the protesters at home who would have spit on him given the chance, won’t have it. When I speak less than flatteringly of the impatience of Americans on Iraq, he corrects me, and relates a list of perfectly good reasons for them to be fed up.
So when it’s over, you try to produce a McCain column for Wednesday, but you can’t. Wednesday, Sam Brownback steps to the same plate, and your arm is fine. You interrogate the guy, assess him, reach a conclusion, and slap a column on the Thursday page. Three up, three down. You’ve got your stuff back.
But Sunday’s deadline draws nearer, and it’s gone again. Desperate, you think: How about a bulleted list of what he said Monday? There’s plenty of it. Naw, that’s a news story, not an opinion column.
And you know, you just know, that the one thing you can’t write is the truth, which is that you just admire the hell out of this infuriating old guy. The fans won’t stand for it. You can hear the beer bottles clattering around you on the mound already.
But it’s no use. You just can’t get the ball across today.

For actual information regarding the McCain interview, and more, go to http://blogs.
thestate.com/bradwarthensblog/. 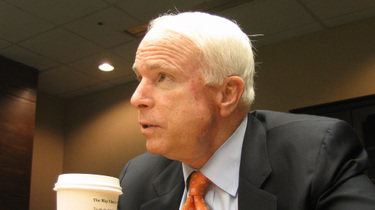 6 thoughts on “That infuriating John McCain, or, How do you pitch to a hero?”