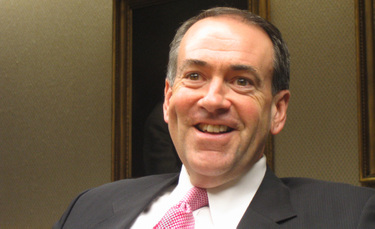 By BRAD WARTHEN
EDITORIAL PAGE EDITOR
THERE’S A PRINCIPLE that I long thought was a given in American politics. As long as it held true, it didn’t matter so much if the “wrong” candidate won an election. No matter what sort of nonsense he had spouted on the stump, this stark truth would take him in its unforgiving grip, set him down and moderate him.
Mike Huckabee, who is seeking the Republican nomination for president, made reference to this principle when he met with our editorial board Thursday:
“One of the tough jobs of governing is, you actually have to do it.” That may sound so obvious that it’s foolish, like “One thing about water is, it’s wet.” But it can come as a cold shock.
Think of the congressional class of 1994. Newt Gingrich’s bomb-throwers were full of radical notions when they gained power. But once they had it, and used it, however briefly, to shut down the government, they quickly realized that was not what they were elected to do.
Or some of them realized it. More about that in a moment. Back to Mr. Huckabee.
Mr. Huckabee is a conservative — the old-fashioned kind that believes in traditional values, and wants strong, effective institutions in our society to support and promote those values.
Many newfangled “conservatives” seem just as likely to want to tear down as build up.
If Mr. Huckabee was ever that way, being the governor of Arkansas made him less so. “As a governor, I’ve seen a different level of human life, maybe, than the folks who live in the protected bubble of Washington see,” he said. And as a governor who believed he must govern, he was appalled when he saw government fail to do its job. He points to the aftermath of Katrina: “It was one of the more, to me, disgusting moments of American history…. It made my blood boil….”
Perhaps I should pause again now to remind you that Gov. Huckabee is a conservative: “I’m 100 percent pure and orthodox when it comes to the issues that matter to the evangelical or faith voter, if you will,” he says.
“But as a governor, I spent most of my time improving education, rebuilding the highway system, reforming health care in Arkansas” — things that are not inconsistent with conservatism.
“And for that I had the right — had earned the right, if you will — to pass some pro-life legislation, 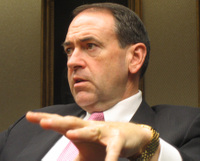 and strong pro-marriage and pro-family legislation. But I didn’t spend 90 percent of my time pushing that….”
OK, let’s review: As a conservative, he has a certain set of ideals. But he knows that being governor isn’t just about promoting an ideology, whatever it might be. Being governor, if the job is properly understood, is the most pragmatic form of life in our solar system — except for being mayor.
People expect certain things of you, and you’ve got to do them. Successful governors realize that, whether you’re promoting ideals or paving the roads, “The wrong thing to do is to go and to try to stick your fist in the face of the Legislature that you know is not necessarily with you, and create a fight.” (Gov. Huckabee had to deal with a Democratic assembly.)
So what’s the right way?
“You positively share your message, you communicate it… . If you can’t do that, I don’t think you can lead. Just… quite frankly, I don’t think you have a shot at it.”
I know someone who needs to hear that. Remember the class of ’94? The only lesson Mark Sanford learned from shutting down the federal government was that it was worth trying again. So last year, he vetoed the entire state budget when lawmakers failed to hold spending to the artificial limits he had decreed.
Of course, they overrode him. And he knew they would. For him, it was about the gesture, not about governing. It’s about ungoverning. It’s about the agenda of the Club for Growth.
Gov. Huckabee, being conservative fiscally as well as otherwise, has been known to turn down taxes, but that’s an area where pragmatism can outweigh ideals:
“… We had a Supreme Court case where we were forced to deal with both equity and adequacy in education,” said Mr. Huckabee. “There was no way to do that without additional revenue.”
Still, he refused to sign the tax bill Democrats gave him.
“I didn’t think we were getting enough reform for the amount of money. It wasn’t that I didn’t support additional revenue, because I did, so I’ll be honest about that. But… we weren’t pushing for enough efficiency out of the system.” What sort of efficiency?
“I wanted a greater level of school consolidation in order to fund the efficiency, which was a very unpopular thing.”
Our governor has said he’s for school district consolidation (as am I), but he’s never done anything effective to achieve it. That would require building a constructive relationship with the Legislature.
Another time, Gov. Huckabee actually opposed a tax cut. Why? That governing thing again: “Well, I supported the elimination of the grocery tax, but not the timing, and the timing would have meant we literally would have closed nursing homes, had to slash Medicaid. I mean, it’s one thing to trim the fat off the bone, it’s another thing, you know, to start going into the bone itself.”
That wouldn’t worry the Club for Growth, about which Gov. Huckabee says, “They hate me. I call ’em the Club for Greed. That’s part of why they don’t like me… If people don’t have the courage to run for office, they can just give money to them and they’ll do the dirty work for you.”
“I think it’s a sleazy way to do politics.”
The Club for Growth loves Mark Sanford.
I don’t know what sort of president Mike Huckabee would make, but I wonder whether he’d do another stint as governor….

For video, go to http://blogs.thestate.com/bradwarthensblog/.

14 thoughts on “Mike Huckabee on the obligation to govern”