Last week, I happened to mention what happened in Little Rock 50 years ago in the course of asking the successor of Orval Faubus about his thoughts on race relations today, in Arkansas and the nation.

Mike Huckabee noted that today — Sept. 25 — would be the 50th anniversary of the day that the 101st Airborne Division escorted nine black kids to class at Central High School, to get them past the mob of white racists outside.

To mark that day, I edited a short video clip of the former governor talking about the meaning of those events. He mentions two items of note: First, that his daughter Sarah — seated behind him in the photo below — was attending Central High at the time when the 40th anniversary was marked (which raises yet another point of contrast with a certain other governor); and second, that he takes great pride as a Republican in having won 48 percent of the black vote in one of his elections. 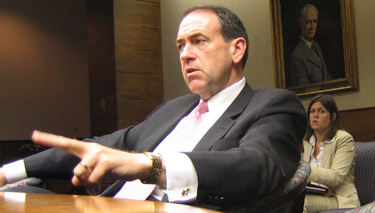