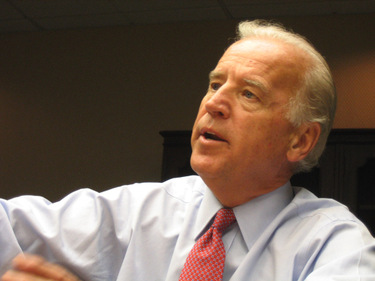 By BRAD WARTHEN
EDITORIAL PAGE EDITOR
Why should voters in South Carolina’s Democratic primary skip the front-runners to pick Joe Biden as their nominee for president?
Because, he explained to our editorial board last week, he’s the guy with the juice. He’s got the experience to have the knowledge, he has sound ideas based on that knowledge, and he’s got the credibility to sell the ideas.
Today, he says, there’s no juice in the White House.
Take the immigration issue. Why, we asked, did the recent comprehensive bill fail?
“Bush,” said Sen. Biden.
“That’s not a criticism,” he added.
“I think Bush was more right on immigration than he’s been on any other national issue. But he had no

credibility. He could not carry any of his base.”
He said it was a failure of presidential leadership. “You’ve got the lamest lame-duck president in modern history now. And it is actually a shame. No fooling. Because the few things where you could generate a consensus with him, he’s not of any help.”
So who has the juice? Joe Biden does, as he had demonstrated a few days earlier.
The previous week, he had pulled off the apparent miracle of getting 75 members of the U.S. Senate — which meant getting a bunch of Republican votes — to vote for the centerpiece of the Biden platform: A plan to divide Iraq into three semi-autonomous regions under a loose federalist system.
After all those pointless votes about timetables and such that other Democrats kept pushing, in full knowledge that they would not find their way into law, all of a sudden a consensus approach had emerged.
How did that happen?
First, “I don’t think there are 12 Republicans that support this president’s position,” which can be summed up in two sentences: “Stand up an Iraqi army so American troops can stand down. Two, strong central democratic government in Baghdad that will act as the first domino to fall through the middle east, generating the end  — if not the end, a fatal blow  — to terror.”
Under that approach, the purpose of the surge was “to give the warring factions breathing room… to make a political accommodation.”

But there’s no such accommodation. Sen. Biden says a lot of senators have been over to Iraq and talked to real people. And what have they learned?
“Nobody  — nobody, nobody, nobody — thinks there’s a possibility of establishing a strong unity government that can gain the support of the Iraqi people and bring security and economic prosperity to Iraqis. Nobody.
“Every success that exists in Iraq has been at the local level. That’s where the successes come.”
The only ways the surge has worked, he maintains, is where it has enabled local, homogenous authorities to run things their way, without interference from Baghdad.
Last year, only 1,000 Sunnis stepped forward in Anbar province to join the national police force run by the Shi’a-led government in Baghdad. “The national police force is corrupt,” says Sen. Biden. “It is zero; it’s worse that zero. They’re death squads.”
“Eliminate it.”
The surge worked when Americans “said to the tribal leaders, look guys, you can patrol your own streets. You mean we don’t have to have the central government here? Absolutely. Good.” So “10,000 people show up from the tribes…. They’re patrolling the streets. They still haven’t gotten it under control. But it’s a lot further down the road, and no one’s talking about a national police force.”
Look at Kurdistan, he says, which has had local autonomy for some time. “And so everyplace you look to, it comes down to devolving power, where there’s any possibility of it working.”
How did he sell the Senate on this? First, “I’ve been working these guys and women for a year on it; I’m like a broken record on it.” He sold it on the merits, but it was also appealing because it didn’t involved the constitutional problem of trying to tell the commander in chief how many troops he can send where when.
But it also came down to juice, to credibility: “I think if you ask Lindsey or you ask other Republicans, they trust me; I don’t ever play a game with them. I think that they think I know something about this

issue, and I have not been one who is saying things that they know is not rational.”
As opposed to certain other people seeking the Democratic nomination: “How can you say on stage, almost to a person, that I will not withdraw troops; I’ll have to have troops there, combat troops there for X amount of years, maybe to 2013, and by the way, I’m voting to cut off funding for those troops, yesterday?”
So unlike certain people named Clinton, Obama and Edwards, “I have some credibility with these guys that I’m not playing a political game with them.”
What about bringing troops home? “What I don’t want to do is fly under false colors here. I don’t want to tell the American people that if this plan is adopted, all Americans come home,” he said.
“If this plan were adopted, it’s the only way in which you could justify keeping American forces there.”
But if it weren’t adopted, unlike his rivals, he’d get the troops out right away.
“I would not withdraw from the region. But I’ll be damned if I’m gonna continue to have my son’s generation stuck in a position where they’re on the fault line, and the only thing they’re there to do is keep things from getting worse,” without any prospect of them getting better.
So that’s his deal: He’s the guy with the plan, and the juice to get it done. And last week, he had the cred to make folks believe it.

For video from this editorial board interview, click here. 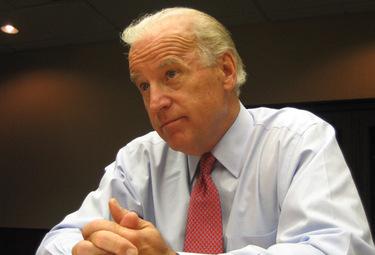