Folks, this came in from the McCain campaign:

Please join Senator John McCain at 5:00pm on Friday, November
2nd, 2007 in honoring the memory of Lance Corporal Joshua L. Torrence, USMC.
Joshua graduated from White Knoll High School in Lexington, SC where he made a
name for himself both in the classroom and on the football field.  He was the
epitome of a leader and a true team player.  Following his graduation in 2003,
Joshua selflessly answered the call to duty.  He enlisted in the United States
Marine Corps and was deployed to Iraq.  As those who knew Joshua will tell you,
it was no surprise that he volunteered to be transferred to Fallujah, where some
of the fiercest fighting of the war was taking place.  Sadly, he lost his life
while on patrol on March 14, 2005.

Because of their love of Joshua and their gratitude for his
service and sacrifice, members of the White Knoll High School community have
united in a remarkable way.  They have organized a massive grassroots campaign
in order to raise the $150,000 necessary to name the high school’s new field
house in Joshua’s honor.  Senator McCain will be attending the November 2nd
ceremony which will take place prior to the White Knoll vs. Lexington football
game.  Additionally, four of the 9/11 FDNY firefighters, who also play on the
FDNY football team, are flying to South Carolina to help honor Joshua’s
service.

Please join Senator McCain in supporting this
wonderful cause.  Your financial support is much appreciated.  This
event is non-political and 100% of the proceeds will go directly towards the
memorial field house.  To learn more about Joshua and how to help the community
accomplish their goal, please visit the following:

News coverage about the effort:
http://youtube.com/watch?v=9AshUXXQoQw

Which reminds me that I had meant to bring your attention to this editorial in the WSJ yesterday. It 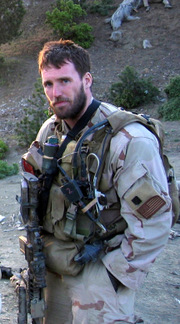 was an editorial about the awarding of the third Medal of Honor in the war. It was presented to the family of Lieutenant Michael P. Murphy, a Navy SEAL who was killed in Afghanistan in 2005. An excerpt:

The SEALs were at a tactical disadvantage and became pinned down in a ravine. Lt. Murphy, already wounded, moved out from behind cover, seeking open air for a radio signal to place a rescue call. He was shot several more times in the back. He dropped the transmitter, picked it back up and completed the call, and then rejoined the fight.

Only one of the four SEALS in the team would get out alive. Lt. Murphy was not one of them. The Journal’s conclusion:

In Iraq and Afghanistan, the U.S. military is almost spoiled for choice when it comes to such instances of heroism and sacrifice. It is regrettable that these volunteers are too often rewarded with indifference by the U.S. political culture, where "supporting the troops" becomes nothing more than a slogan when there is a score to settle. The representative men in this war are soldiers like Lt. Murphy.

Thank God for Lt. Murphy and those like him. And may God send solace and strength to his family. Those are his parents, Maureen and Daniel, below, with Navy Secretary Donald Winter at left. 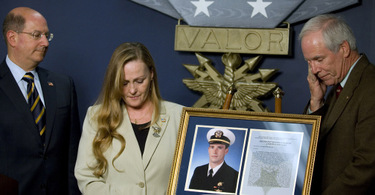