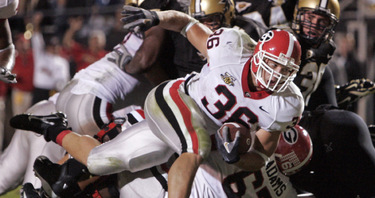 Way, way more intense than this…

Followers of this blog may or may not have picked up on the fact that I am not a football fan. In fact, it would not be unfair to call me an anti-fan. I mean, I’m glad everyone is such a good mood in Columbia these days because of the Gamecocks’ fortunes (bread and circuses do, indeed, have a practical point), but I’ve also seen them drunk, angry, and up close, so I take these good vibes with a full lick of salt.

But Saturday night, I found myself in a local pub actually watching college football — and being drawn into it. It was less a cultural phenomenon than a neurological one. It was the effect, previously unknown to me, of wide-screen HDTV.

I commented to my wife that someday, when our perpetual state of pecuniary strangulation has subsided somewhat (I’m a perpetual optimist), I’m gonna have me one of them. The idea, for me, is that I’ll then be able to get full the effect from all those DVDs I’ve been collecting in widescreen format (even though I realize they won’t fully use the features of the screen). That’s why I have a TV set, after all — to watch movies on.

And wonder of wonders, she didn’t contradict me! She actually spoke of the thing as though it were a possibility, wondering where it might go in the house. She was thinking along the lines of the same location as my hypothetical pool table. I suggested it would be hard to fully extend a LaZboy with a pool table in the way, but I did it gently, so as not to break the spell.

I think she was, at least to a slight extent, in the grip of the same thing that grapped me — the extreme, deep intensity of those hypersharp colors dancing around on the screen. I actually got, sort of, in a way, caught up in the games on the screen.

But then, I looked over at the other screen, and everybody looked just as intensely clear and sharp, but they didn’t seem to have on makeup. They looked explosively natural. I then realized that there was a tiny flaw in the color tuning of the first one, imposing a slight bronzing effect on European skin tones, suggestive of makeup. But it looked so good anyway that if I hadn’t had the other screen to compare it to, I would have said the color was beyond perfect.

Yeah, I know "beyond perfect" is an oxymoron, but what do you say about colors and shapes that impress themselves on your brain in a way that goes beyond colors and shapes as they are commonly understood. It’s like those old detergent commercials from when they first started adding phosphorus or whatever to the powder, and the ads said "whiter than white." These uniforms on these players were redder than red and bluer than blue and turquoiser that turquoise.

At one point, we encountered some folks we knew — friends of one of our daughters. And as my wife was speaking to them and I was looking over her shoulder trying to listen, it hit me that their faces were so dimly lit, so flat in their coloring, that my eyes sort of slid off of them, with little to grab onto.

My senses had become jaded that quickly. We had been there less than an hour, and the intensity of color had already made real people and real life insufficiently stimulating. I was appropriately embarrassed, ashamed and appalled at this realization. Time to leave.

But it occurred to me leaving that if I had one of those things at home, I might not just watch movies on it. I might even watch football. But don’t worry, I won’t let me or mine get corrupted or anything. I’ll get my men to stick beeswax into their ears and tie me to the mast before hitting the "power" button. 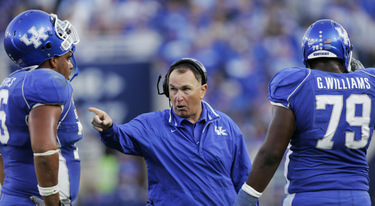 … and way bluer than this.