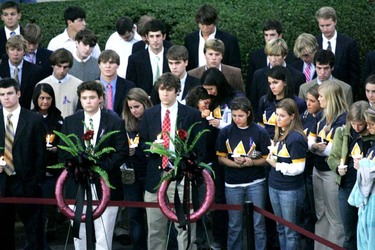 You may have noticed that I haven’t had anything to say about the kids who died in the fire. That’s because I don’t know what to say, beyond the fact that it’s awful.

Part of this is that Cindi and I are not the world’s best empathizers. Of those currently on the board, Warren (who is almost, but not quite yet, an ordained AME minister), is the best. At times such as this, we really miss Claudia Brinson, who was really good at it. She said the right thing, and said it beautifully. Back when she and John Monk were on the board, they were always the first to say we needed to say something about something like this. I would agree with them; I just wouldn’t know what to say about something like this — something that everyone was talking about, but which did not have an obvious editorial point. No matter of policy or anything like that, which of course is the usual province of editorials. (The term we use under such circumstances is that we just need to "resonate" to the news, something I’m not that great at.)

But there’s more to it than that, at least for me. As I said in our meeting this morning, I don’t even know what to say in a case like this when I’m intimately involved with it. When my youngest daughter’s boyfriend died a month back, I drove up to Pennsylvania to be with her, and was there for the visitation and funeral, and I still didn’t know what to say — to his mother, his friends, even to my daughter. Warren says that sometimes you don’t have to say anything; you just need to be there. And that’s true, which is why I drove up there. But there’s still a moment that demands something be said — such as when I was introduced to David’s mother at the funeral home — and I am struck dumb.

I continue to want to comfort my daughter over the phone, but I continue to be at a loss. I just tell her a lot that I love her.

Anyway, we have an editorial for tomorrow — a short editorial, fleshed out with a photo, because there are just so many words you can come up with even when you’re trying hard. Warren wrote it, and I tried to improve it in the editing, but I just finally had to let go and put it on the page, dissatisfied.

Words are just so inadequate.

I do have a column rattling around that is peripherally related to this tragedy, but I think it’s one that would be better a few days from now, so I’m saving it for Sunday. A column is easier than an editorial under such circumstance. An editorial demands authoritative pronouncements; a column allows for vagueness and uncertainty. But I’m going to let that one gestate.

In the meantime, if you have words — perhaps there are some Claudias out there among you, who possess the words I lack — you may put them here. Or better yet, go to this page at thestate.com. That would be more respectful. A blog just seems like an awfully frivolous, useless thing at a time like this.

One thought on “Words fail”