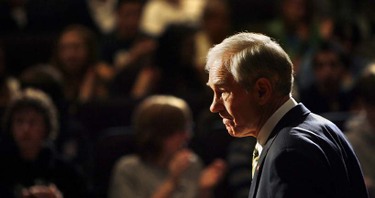 Since I couldn’t make it to the Ron Paul event, I asked the correspondent who originally brought it to my attention to tell us about it:

Dear Brad,
Thanks for the reply. I know it was a busy day,
with Bush and several candidates visiting at the
same time. The Rally was a great success. The West
Columbia Riverwalk amphitheater provided a
charming, intimate setting for Dr Paul to share
his message of peace, prosperity and liberty to
several hundred supporters. Folks came from as far
away as Chattanooga and Atlanta to hear him speak
and have the opportunity to meet him in person.
I tried to get the campaign to schedule an
interview with your editorial board while he was
in town. Perhaps next visit?  In the meantime, I
hope you will be including him in your series this
week on Republican candidates. I was disappointed
to see no mention today about his historic
fundraising on Monday. At 4.2 million, I believe
it was the largest Republican primary donations in
a 24-hour period ever! Surely that’s more
newsworthy than Obama running a new ad, isn’t it?
Dr Paul truly is a viable contender, contrary to
what the MSM would like everyone to believe. As a
ten-term congressman, he is extremely
knowledgeable about the destructive issues facing
America. People from all walks like his message
and feel hopeful that we can turn things around
and restore this country to its former greatness
… if they can just hear it. Please allow your
readers to make up their own minds with equal
exposure of all the candidates, not just the
anointed RudyMcRomneyson.

Thanks for the report. Here’s a hint, though: When an editor gives you access to get your message out, you’re probably better off spending your words on that purpose, rather than wasting them complaining.  But the complaints serve a purpose; they give me a setting for correcting several widely-held misconceptions:

As for what I do control in my own little bailiwick — I’ll have you note that with this second post, Ron Paul has received more coverage on this blog in the past couple of weeks than any "candidate" other than Steve Colbert. (Or maybe I should say, he’s tied with the Hillary/Obama combo of these two posts.) And Mr. Colbert got the coverage he got for the same reason certain non-news events dominate what we laughingly call "TV news" — I had video of it.

18 thoughts on “Correspondent weighs in on Ron Paul event”