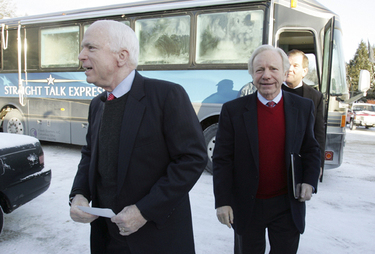 “In this critical election, no one should let party lines be a barrier to choosing the person we believe is best qualified to lead our nation forward. The problems that confront us are too great… for us to play partisan politics with the Presidency.
“We desperately need our next President to break through the reflexive partisanship that is poisoning our politics and stopping us from getting things done.”
— Sen. Joe Lieberman,
endorsing John McCain

JOHN McCAIN got an early Christmas present up in New Hampshire Monday. So did the UnParty.
The UnParty, I should explain, is a product of my wishful imagination, an anti-partisan alternative to the foolish, vicious Punch and Judy show that the two parties play out daily on 24/7 TV “news” channels. It has no infrastructure, no declared candidates, and exists mainly on my blog and in gratuitous mentions here that probably mystify more than inform.
John McCain, however, is far more substantial. He is an actual U.S. senator who is seeking the Republican nomination for president of the United States. You may have heard of him, in spite of what sometimes looks like a conspiracy on the part of major media and poll respondents to make him seem a marginal figure.
The Christmas present to which I refer was the endorsement of Joe Lieberman, late of the Democratic Party, who strode triumphant over the yammering partisans of his own former faction in last year’s elections and is now perhaps the only major political figure in this country who is really and truly free to endorse whomever he honestly believes is the best candidate. And out of the crowds of candidates seeking the office, he chooses to endorse his friend and colleague John McCain, and parties be damned.
This is not the only big present Sen. McCain has received early this week. On Sunday, he was endorsed by three newspapers, two of them being The Des Moines Register and The Boston Globe. (The third was the less-well-known Portsmouth Herald in New Hampshire.) Between them, they eclipsed the earlier endorsement he had received from the storied New Hampshire Union Leader.
(Santa wasn’t quite as generous to other boys and girls. On the Democratic side, Hillary Clinton and Barack Obama had to share the loot: Des Moines went for Sen. Clinton; Boston for Sen. Obama.)
An excerpt from the Globe’s McCain endorsement:

“Conventional wisdom among political handlers used to hold that a candidate needed to capture the political center. The last two presidential campaigns proved that wrong. The Republicans scraped out victories by pressing just enough buttons and mobilizing just enough voters. But such wins breed political polarization and deprive a president of the political capital needed to ask Americans to sacrifice in difficult times.
“The antidote to such a toxic political approach is John McCain. The iconoclastic senator from Arizona has earned his reputation for straight talk by actually leveling with voters, even at significant political expense….
“As a lawmaker and as a candidate, McCain has done more than his share to transcend partisanship and promote an honest discussion of the problems facing the United States….”

You’ll note a certain resemblance to the quote above from Sen. Lieberman — the emphasis on getting outside the respective comfort zones of the partisans, and having the courage and conviction to make the hard choices that are necessary to further the good of the country. Echoing a John F. Kennedy speech I recently cited here, Sen. Lieberman said Sen. McCain can be trusted to do the right thing “not only when it is easy, but when it is hard.”
That’s what appeals to me about the Lieberman endorsement. It’s not so much that he endorses McCain as the reasons he gives.
At this point I should note that this column is not about boosting the candidacy of John McCain. I know better. The fact is, Sen. McCain’s biggest problem in the South Carolina primary may be the fact that he is not seen as “Republican enough” by some, and this endorsement hardly helps. He does work across the aisle — on campaign finance reform, on fighting corporate welfare and global warming, on promoting rational immigration policy. He does take stands on the basis of the greater good, with little regard for personal political consequences. And there are people who don’t like those facts.
To the extent that there is electoral advantage to be derived, it’s in New Hampshire, where, as The Washington Post notes, the McCain campaign is once again “targeting independents more than it is establishment Republicans.” But even there, the benefit is debatable. It certainly doesn’t pull over any Democrats, to whom Mr. Lieberman is anathema.
What is most exciting about this endorsement is less the hope it offers the McCain campaign, and more the hope it offers for American politics that something like this can even happen.
Over here at the UnParty — where anything that confuses both partisan Democrats and partisan Republicans is welcome — the Lieberman endorsement is very encouraging news. Lord knows that these days, in the 16th year of the bloody Bush-Clinton Wars, we don’t get much of that. 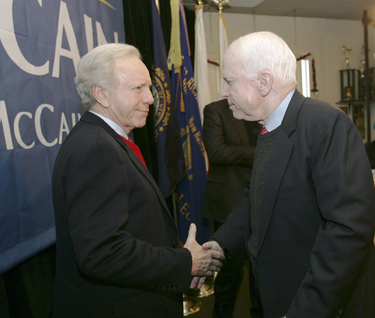