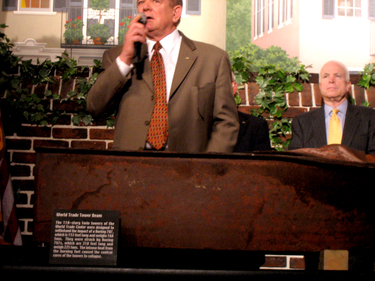 This morning, I turned out for a campaign announcement by John McCain, and realized when I got to the State Museum that I should have dressed better — or at least shaved. He was there with four admirals, representative of the 110 admirals and generals who are endorsing his campaign.

It wasn’t just the brass; there were some impressive people from the ranks as well. Command Sergeant Major James "Boo" Alford, formerly of the U.S. Army Special Forces and veteran of Korea and Vietnam, was among them. That’s him pictured below with Tut Underwood, P.R. guy for the museum.

Here’s video from the event:

And here’s an excerpt from the release (which you can read in its entirety here):

Today over 100 retired admirals and generals endorsed John McCain for President of the United States at a press conference in Columbia, South Carolina. These distinguished leaders supporting John McCain come from all branches of the armed services and include former POWs, Medal of Honor recipients and former members of the Joint Chiefs of Staff.

"This nation is at war and we’d better damn well understand that fact," said Admiral Leighton "Snuffy" Smith, USN (Ret.). "John McCain understands it, and he is the only candidate that has not wavered one bit in his position regarding the importance of victory in the war against Islamic extremism or in his commitment to the troops who are doing the fighting. He has consistently demonstrated the kind and style of leadership that we believe is essential in our next Commander in Chief. Our nation faces a growing array of serious foreign policy challenges. John McCain is the ONE candidate who, in our view, truly understands the strategic landscape and is fully prepared to deal decisively and effectively with those who wish to be our friends and, importantly, those who wish us harm."

The event was held on the museum’s fourth floor. Sen. McCain and the admirals stood behind a twisted
steel beam from the World Trade Center — what you might call a way of focusing civilians’ minds on what’s important. (Inset, at right, you see Green Diamond opponent and McCain supporter Robert Adams and his kids by the beam.)

Anyway, when the event was over, I paused only to grab a quick coffee before going straightaway to get a nice short, regulation haircut. Next time, I’ll be ready. 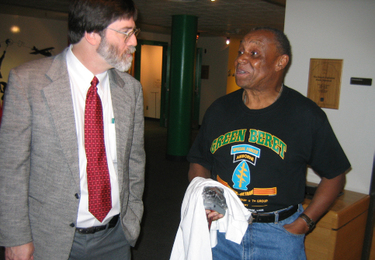