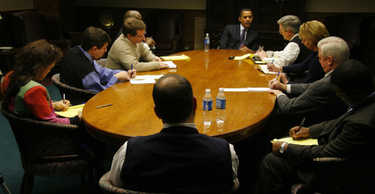 By BRAD WARTHEN
EDITORIAL PAGE EDITOR
A remarkable thing happened this week to The State’s editorial board — again. For us, it was the equivalent of lightning striking the same place, twice in the same month.
After difficult, agonizing discussions over presidential primary endorsements in both 2000 and 2004, we arrived at a quick consensus on endorsing Sen. Barack Obama for the S.C. Democratic Primary on Saturday.
We met with Sen. Obama Monday morning, before he and the other candidates spoke at the State House. (Neither Hillary Clinton nor John Edwards ever met with us, despite long-standing invitations — repeated invitations, in Sen. Clinton’s case.)
Our decision was made easier by the departure of Sen. Joe Biden. We might have been torn between his experience and foreign policy vision, and fresh hope for the future offered by Sen. Obama.
As it was, Sen. Obama clearly stood out as the best remaining candidate — and he had always been the most exciting and inspiring in the field.
It’s not just that he might be the first black president — Sen. Clinton would make history, too. It’s that he offers a fresh start for American politics. It is his ambition to be a president for all of us — black and white, male and female, Democrat and Republican. The nomination of Sen. Clinton would by contrast kick off another bitter round of the pointless partisanship that has plagued the nation under presidents named “Bush” and “Clinton.”
As he did before the Republican primary, Associate Editor Mike Fitts framed the discussion of our Democratic endorsement, and did a sufficiently thorough job that the rest of us merely elaborated on his observations.
First, he mentioned the support John Edwards had enjoyed among members of our board in 2004, although he did not get our endorsement then (in a grueling three-hour talkathon, I successfully pressed the board to choose Joe Lieberman instead). This time, he was “a substantially different guy” — an unappealing embodiment of class resentment.
Also, his extreme position on Iraq — wanting to pull all troops out, even those who are training Iraqis — made him a nonstarter.
About Hillary Clinton, Mike said the same thing he said about Mitt Romney 10 days earlier — “Boy, I wish she’d come in to see us, because I have so many questions.” Mike cited her obvious intelligence, and the fact that she “knows where the levers of power are” — especially within the Democratic Party. She’s worked the corridors of Washington since well before her time as first lady.
But she could never have built the kind of coalitions that could break the partisan gridlock inside the Beltway — even if she wanted to, and we’ve seen little indication that she would want to.
And her policy prowess is that of the insider. We saw her failed effort to reform our health care system as emblematic of her style — get a bunch of wonks in a room, close the door, and come up with something too complex and nuanced to sell.
Barack Obama, by contrast, would be oriented toward — and more successful at — bringing the American public into the debate, and persuading us to agree to a solution. He has that leadership ability that she lacks.
Sen. Obama has political gifts that are more reminiscent of former President Clinton. Of Sen. Clinton, Mike said, “She’s sort of caught between Obama and her husband, as two of the most evocative leaders we’ve had in a while.”
While Sen. Obama is completely true to the highest traditions of the Democratic Party, he would have the potential to lead others as well. Sen. Clinton’s main interest in Republicans seems to be beating them, prevailing over them, having things go her way rather than theirs.
“I would really like us to be talking about Joe Biden or Bill Richardson,” said Associate Editor Cindi Scoppe. That leaves her with what she sees as “an emotional decision,” which initially makes her uncomfortable. Cindi usually prefers the wonkiest option, but in the end she’s quite OK with “going for the exciting person who gives us hope.”
“Hillary is very smart,” Associate Editor Warren Bolton agrees. But “I think she thinks she is the only one who has the answers.” Publisher Henry Haitz said the same thing, in almost the same words, a moment later.
In the end, we came to a second quick consensus for much the same reason as the first time: We thought among the Republicans, John McCain had the best chance of uniting the country and leading in a positive direction. On the Democratic side, the one person who offers that same hope is Barack Obama.

(Both photos from the board’s meeting are by Chip Oglesby of thestate.com. To read The State‘s endorsement of Barack Obama, click here. For video about the endorsement, click here.) 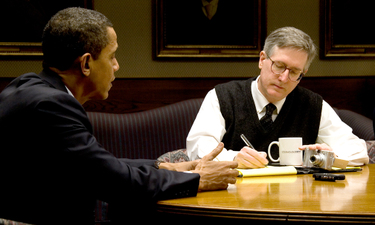