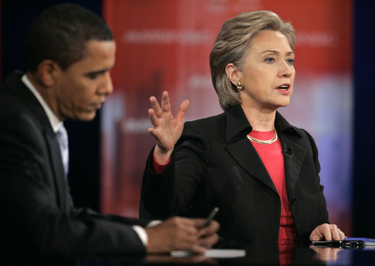 So Barack Obama and Hillary Clinton have put their spat over race behind them. That’s good, but it still leaves me with a question that I guess only a Clueless White Guy could ask: What was that all about?

Maybe it’s that when it was all brewing I was too busy with the GOP primary to take notice. It seemed to happen late last week, when I was trying to get our endorsement of John McCain decided, written, elaborated upon, discussed in multimedia, and put on the Sunday page.

That’s got to be it. There’s got to be something I just missed entirely. That’s why I find myself still asking, What did Hillary Clinton say that was so wrong? (And note that I’m not even getting into Bill Clinton saying Sen. Obama
was peddling "fairy tales." Supposedly, that was taken by some as
racially insensitive also. But Mr. Clinton say
anything about anybody’s race? He did say "fairy," but it
seems that would offend a whole other demographic group, and then only
if it was really, really willing to stretch to be offended.)

Correct me if I’m wrong, but did this controversy not erupt when the senator from New York said:

"Dr. King’s dream began to be realized when President Lyndon Johnson
passed the Civil Rights Act of 1964. It took a president to get it done."

And did it not only deepen when she said:

“Sen. Obama used President John F. Kennedy and Dr. Martin Luther King
Jr. to criticize me. Basically compared himself to two of
our greatest heroes. He basically said that President Kennedy and Dr.
King had made great speeches and that speeches were important. Well, no
one denies that. But if all there is (is) a speech, then it doesn’t
change anything.”

This was deemed offensive by some, and the nature of the offense was racial, apparently because Dr. Martin Luther King was mentioned. Or maybe because Sen. Obama is black, or not, depending on who’s keeping score.

Where did the offense lie? Haven’t all great, inspirational leaders been followed by more prosaic types who did much to make the dream a reality? Did Moses not have his Joshua? Did Jesus — whose sudden execution essentially left his movement, at first, in shambles — not have his St. Paul? And do any of us think that, because he essentially invented the idea of a "church" as something Gentiles could join, that St. Paul was greater than Jesus? I would hope not.

And correct me if I’m wrong, but didn’t MLK, in the most famous passage of one of his most inspirational speeches, compare himself to Moses? And was that comparison not specifically with regard to the fact that, while he had led the movement right up to the border, someone else might have to lead it into the Promised Land? ("I may not get there with you.")

Or did I miss something? It’s highly possible that I did, which is why I’m asking. I’ve looked at several stories on this subject, but it’s certain that I haven’t read them all.

But if I didn’t miss something, then I think Sen. Clinton caught a lot of grief she didn’t deserve. She might be called all sorts of things, by those who are inclined to criticize her — overbearing, perhaps. Condescending, maybe. But racist? I don’t think so.

By the way, that was what I didn’t like about the Ariail cartoon that I showed you in sketch form yesterday: I thought it was way unfair to Mrs. Clinton. Of course, it is in the essential nature of caricature to exaggerate, and even to offend. But I thought the Ariail cartoon we actually used made the same point (with which I disagree, but what Robert wants to say is Robert’s business), and since it left out the emotional hand grenade of the lawn jockey, it did so in a way more likely to be clearly understood. But it’s hard to be sure about such things, which is why I asked y’all about it. 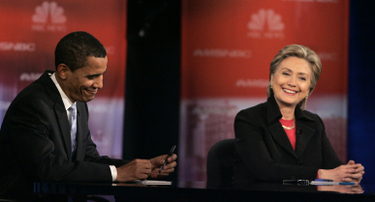 18 thoughts on “What did Hillary say that was so wrong?”