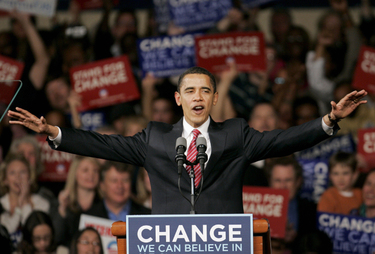 As I try to listen to Obama’s victory speech, my two fellow bloggers — one a Republican, the other a Democrat — over across the room are having an argument over the war, or something they always yell at each other about. I’m not really listening; I’m listening to Obama.

Rep. Jim Clyburn just walked into the studio. He’s the U.S. House Majority Whip, who enthusiastically advances his party’s line every day. He’s a fine, dedicated public servant, but he is SO a part of the system that Obama would lead us beyond.

Meanwhile, Obama is giving a speech that marks a huge, historic step forward toward wiping that all away, toward uniting our country so that we can all pull together in making this a greater place to live. What a contrast!

Here are my rough notes from that extraordinary, historic speech from the man who just won the most astounding victory this state has seen in a presidential primary in my 20 years of covering SC politics, the biggest victory that ANY candidate in EITHER party has won thus far in the 2008 campaign for the presidency:

Iowa
there were those who doubted this country’s

desire for something new

young and old, black and white

and yes, the republicans from rural Nevada

saying we are tired of business as usual in

this will not be easy, make no mistake of

what we are up against

the kind of politics that are bad for our

party, are bad for our country

running against:
exactly what’s wrong with our politics

why they tune out

give the American people a reason to

habits that prevent us from getting things

(that white can’t vote for black, that

I saw what america is (and what it can be)

When I hear we’ll never change… think of

the former Thurmond staffer who knocked on

doors for THIS campaign.

YES WE CAN heal this nation.
YES WE CAN…

the wind at our backs.

Out of many, we are one; as we breathe, we

(will overcome the cynicism)

Thank you, South Carolina, we love you!

We just made us some history here in South Carolina.

45 thoughts on “What a TREMENDOUS victory speech!”