The Pentagon has sent out a release to ‘splain how it is that we’re confident the Navy can shoot down that satellite:

Although the chances of an impact in a populated area are small, the potential consequences would be of enough concern to consider mitigating actions. Therefore, the 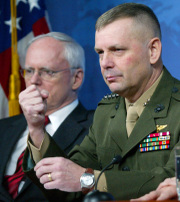 President has decided to take action to mitigate the risk to human lives by engaging the non-functioning satellite. Because our missile defense system is not designed to engage satellites, extraordinary measures have been taken to temporarily modify three sea-based tactical missiles and three ships to carry out the engagement.
Based on modeling and analysis, our officials have high confidence that the engagement will be successful. As for when this engagement will occur, we will determine the optimal time, location, and geometry for a successful engagement based on a number of factors. As the satellite’s path continues to decay, there will be a window of opportunity between late February and early March to conduct this engagement. The decision to engage the satellite has to be made before a precise prediction of impact location is available.

Sounds a bit fishy to me. We’re just gonna go out and DO it, based on nothing more than "modeling and analysis?" We’ve never done this before? Yeah, OK. I hope it works. Otherwise, we’re going to have a hydrazine mess on our hands, and I hear that’s not good.

By the way, in the picture above right, Joint Chiefs Vice Chairman Gen. James Cartwright promises that if the Navy’s fancy-schmancy missile doesn’t work, he will personally take out the satellite with a single punch. (Not really, it just looks that way.)

4 thoughts on “How to drop a satellite”